"In March, Furtwängler recorded Brahms’s Second Symphony in Kingsway Hall with Victor Olof in charge, and there was trouble from the start. Furtwängler seemed excessively nervous and edgy; he paced about and wrung his hands as if searching for the cause of his anxiety, which eventually he thought he had found: it was, in fact, that there was more than one microphone in the hall.

By 1948 the Decca engineers and Victor Olof had had considerable experience in Kingsway Hall and had, by trial and error, produced spectacular results. (I should add that Kingsway is by no means a “difficult” hall for recording purposes, but the correct placement of appropriate microphones still makes the difference between a mediocre and a fine recording.) Furtwängler thought differently. He insisted that one particular microphone out of those in the set-up should be suspended over the centre of the orchestra, and that all the others—there were perhaps five—should be disconnected and removed from his sight.

It was not surprising that when the records were released all the critics were bewildered by the change in the famous Decca sound: instead of the usual combination of warmth and clarity the Brahms recording was diffuse and muddy. The pity of it all was that the performance, as I recall, was remarkable. It may have been full of Furtwangler’s quirks, but it was intense and exciting. Not much, however, of what I heard in the hall itself found its way on to the record, and it was the conductor’s fault."

From “Putting The Record Straight” by John Culshaw (Secker & Warburg, 1981)

John Culshaw states that the "critics were bewildered" by the sound of Furtwängler's 1948 London Philharmonic Brahms Second Symphony recording on Decca. If this was indeed the case they may have been too polite to say so - the two Gramophone reviews of 1948 (78rpm) and 1952 (LP reissue) devote plenty of space to the performance by have little to say on sound quality. Nevertheless, Culshaw hits the nail on the head in his analysis, and it's precisely the kind of problem that Pristine's XR remastering system can work wonders with. The thin, shrillness that pervades the original Decca sound has here been tamed, filled out and transformed into something quite wonderful by comparison to what has come before. I have also been able to cure some pitch problems which particularly affected the latter quarter hour of the recording.

Happily the 1950 radio broadcast with the Berlin Philharmonic of the Haydn Variations was much better recorded, but again XR lifts a veil from this 70 year old recording to reveal it afresh.

But perhaps the greatest surprise is in the quality of the 1930 Hungarian Dances - two short pieces issued on 10-inch 78s. Although sound quality gradually deteriorates across the sides as one would expect, the overall sound quality is remarkable for these two 90-year-old encores. 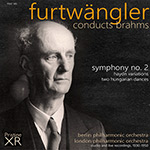