"Toscanini conducted relatively little Schumann. He never performed the First Symphony or the Overture, Scherzo, and Finale, and it seems that he prepared the Fourth Symphony only once. The Second Symphony was performed more often, but Toscanini turned most frequently to the two works he approved for release – The Manfred Overture and the “Rhenish” Symphony.

With the exception of a poorly balanced 1940 broadcast of the “Rhenish” Symphony, all of Toscanini’s NBC accounts of this score are impressive. Here is a conception usually ignored by those critics who allege that the conductor always favored streamlined, uncommonly fast tempos. In the outer movements, Toscanini’s pacing is generally more expansive than that adopted by other conductors and—with a few tasteful revisions in orchestration, mostly involving redistribution of voices—stamped with a transparency and color absent from other conductors’ performances. Particularly interesting is a timbral contrast he draws in the first movement by having the horns play with mutes. In annotations for Toscanini’s RCA recording of the work, Harris Goldsmith suggests this was done to simulate an effect Schumann called for by specifying that valved and natural horns alternate. As natural horns were an anomaly in this pre—period instrument era, Toscanini’s recourse to mutes seems an imaginative alternative.

There are a number of reasons Toscanini’s two accounts of the Second Symphony are among the most interesting of his surviving performances. For one, they preserve his conception of an important nineteenth-century score. Over and beyond that, though, is Toscanini’s view of the work, which in many respects is so strikingly unorthodox, it forces one to hear the music in a totally new—and often compellingly revealing—light. Most intriguing are Toscanini’s unusual revisions of Schumann’s orchestration, revisions that clarify the aesthetic not only of the music but of the conductor as well."

From “Arturo Toscanini, The NBC Years” by Mortimer H. Frank

This release was inspired by an email I received in November 2019 which read thus: “I'm wondering, hoping, you have in that magical place where alternate sources are stored the concerts of Toscanini conducting Schumann. I've heard good sounding recordings of the 2nd symphony and Manfred on YouTube but the commercial recording of the 3rd symphony has always frustrated the heck out of me. It seems to be poster-child of a Studio 8H recording and is so cramped. I love it and would love to hear it as it should be.”

I hope with the present release I’ve achieved all my correspondent hoped for and more – the Third Symphony certainly sounds a whole better than the “sonic disaster” Mr. Frank describes when referring to RCA’s first LP release! 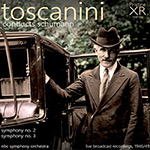