When Stokowski visited London in 1957 to make his annual appearances in the capital, he was invited onto 'Desert Island Discs.' This is the BBC's long-running radio programme in which well-known persons are asked to choose 8 recordings to take with them, should they be marooned on a desert island. Among Stokowski's choices was "Sirènes" from Debussy's Three Nocturnes. "I am a great lover of Debussy," he told the presenter, "and when I was a student in Paris a long time ago I heard him play the piano and I also heard him conduct. I think he was a great genius."

Stokowski's devotion to Debussy's music was exemplified in his orchestral arrangements of "The Engulfed Cathedral" and "Night in Granada," both presented here. He also transcribed "Clair de lune," his 1937 Philadelphia Orchestra 78rpm disc becoming a huge best-seller in its day.

One of the many interesting aspects of Stokowski's three-season tenure with the NBC Symphony was the extraordinary amount of new music he programmed. Perhaps even more remarkable was that he played many such works just once for a single radio broadcast but never returned to them. The selected 'Symphonic Fragments' from Debussy's "Le Martyre de Saint Sebastien" are a case in point, as is Darius Milhaud's 1st Symphony in what was its New York premiere.

The Milhaud family had fled to the USA in early 1940, following the Nazi invasion of France. The Symphony No. 1 had just been completed, having been commissioned by the Chicago Symphony as one of the works marking its 50th Anniversary celebrations that year, and it was conducted by Milhaud himself on 17 October 1940. Commentators have said that this is one of his finest works, with Stokowski's performance having been called "highly idiomatic" and the composer himself declaring it "very powerful."

Our final selection, the 2nd Suite from Ravel's "Daphnis and Chloe," was also the concluding work on that particular day's programme. Listening to it, one wonders if the great maestro had glanced at the studio clock and wanted to make sure the broadcast didn't over-run. At any rate, in the final dance he pushed the NBC players to their utmost limits and duly brought the house down. One thing can safely be said of Stokowski: he was seldom if ever dull! 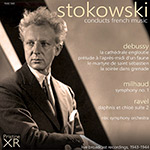