For many Reginald Goodall became a conductor of national (and international) importance only with his emergence as a Wagnerian of the first rank in 1968 when, at the age of 67, he conducted a legendary series of performances at English National Opera of The Mastersingers. An English language Ring cycle followed in the early 1970s and his entire recorded output until his actual retirement in 1987 consisted of Wagner and Bruckner. But his musical background was actually far more diverse than the recorded legacy suggests. In the 1940s he had premiered several compositions by Britten and made several recordings of his works. But during the 1950s and early 1960s, when he mainly served on the musical staff at Covent Garden, there are virtually no recordings of him conducting. The musical director at Covent Garden usually was entrusted with the opera broadcasts, and Goodall only got the nod twice (a single act of Turandot in 1955, followed by a full broadcast of Boris Godunov in 1961 [issued on PACO123]).

In late 1961 Goodall was given the chance to conduct the Royal Opera Orchestra in a radio concert for the BBC. He evidently knew the orchestra well, and for those interested in Goodall beyond Wagner, Britten and Bruckner, it gives us a unique opportunity to hear him conducting different repertoire. Each of the three items chosen by Goodall are unique to his recorded legacy. He chose three quite contrasting pieces. The Polyeucte Overture by the French romantic composer Paul Dukas was composed in 1891 and is highly melodic. L'Ascension by Olivier Messiaen was composed in 1932-3 and is typical of a modernist style with complex interweaving harmonies and rhythms. Robert Schumann’s Symphony No. 4 is a classic of the mid-nineteenth century repertoire, composed in 1841 and revised ten years later. In these three pieces Goodall showcases his versatility as a conductor of the highest order and it’s a shame that neither record companies nor concert planners enabled us to have a more rounded picture of Goodall in his more famous later years.

We are fortunate to have this recording. Goodall’s friend, the bass Victor Godfrey, recorded this radio broadcast using his own high-quality equipment as a surprise gift. So far as we have been able to ascertain this is the only surviving copy of the broadcast as the BBC did not retain it in their archives. 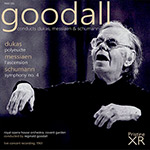