The present release is the first in a series devoted to Eugene Ormandy’s early recordings with the Philadelphia Orchestra for the Victor and World’s Greatest Music labels from 1936 through 1942, with one additional Victor recording from 1945. While the recordings he made during this period with such legendary soloists as Rachmaninov, Kreisler, Heifetz, Feuermann, Rubinstein, Flagstad, Melchior and others have deservedly remained in the catalog for decades, this series will focus on his purely orchestral recordings, which have been rather overlooked in reissues. Several of the works, like the Schumann, Menotti, Barber and Roy Harris items in this release, were never re-recorded by the conductor in his long career, and some have not been available since the 78 rpm era.

As a musician born and trained in Budapest, one would expect Ormandy’s Liszt to be idiomatic and exciting, and so it is. All the more strange, then, that he recorded Les préludes only once more, for Columbia in 1946, and not at all in the LP era. Stranger still is his track record with Schumann. The Second Symphony heard here was begun at his first Philadelphia session in December, 1936 and completed the following month. Prior to that, Ormandy had recorded the composer’s Fourth Symphony in Minneapolis; but after the Second, he was to make no more Schumann symphony recordings for the rest of his career, a particular loss given the strong and committed reading we have here.

Ravel might seem to be an odd discmate to Liszt and Schumann; but Ormandy’s Philadelphia recordings during this period included very little French music – just this, and a couple aria accompaniments for soprano Dorothy Maynor. He would go on to re-record the Daphnis suite four more times during the LP era (two mono and one stereo version for Columbia, as well as a stereo RCA taping); but the present recording has not been available since the 78 era – surprisingly, given its supercharged excitement that surpasses even Munch’s tempo in the finale.

During the late 1930s and early ‘40s, Ormandy became the go-to conductor for Victor’s recordings of Richard Strauss tone poems. Starting with the first electrical recording of the Symphonia Domestica in 1938, Ormandy and the Philadelphia recorded the present Ein Heldenleben the following year, and would go on to record Don Quixote with Emanuel Feuermann in 1940 (Pristine PASC 168). Ormandy recorded three more versions of Heldenleben during the LP era (Columbia mono, 1954; Columbia stereo, 1960; RCA stereo, 1978), but the present one is the swiftest of them all.

Throughout his conducting career, Ormandy was a committed champion of American music. The works by Menotti and Barber were not only disc premières; they were the first recording of any piece by the former, and the earliest recorded orchestral work of the latter. The Roy Harris suite is comprised of the two orchestral interludes from the composer’s Folksong Symphony framing a newly-added middle section. It remained unissued during the 78 era.

The two Sousa marches, never reissued until now, were recorded as a display of patriotism at the orchestra’s first session after America entered the Second World War. It was to be the last under their Victor contract. Shortly afterward, the first Petrillo Ban on recording went into effect; and when it was over in 1944, the Philadelphia Orchestra began what was to be a twenty-four year association with Columbia (except for one make-up session in 1945 – but that’s a story for another volume . . . )

Eugene Ormandy and The Philadelphia Orchestra 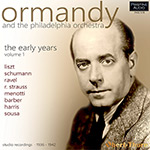