On October 9th, 1947, Artur Rodziński led his inaugural concert as the fourth music director of the Chicago Symphony Orchestra. Three months later, the ensemble’s board of directors announced that he would not be re-engaged for the following season due to disputes over cost and artistic control issues. His one season, however, was a marked success with both critics and audiences, and resulted in a handful of memorable recordings. This release assembles all of them on CD together for the first time, and adds the not inconsequential bonus of his complete recordings for the Remington label.

By the time he assumed leadership of the Chicago Symphony, Rodziński (1892 – 1958) had enjoyed a charmed career. After being Stokowski’s assistant in Philadelphia (1925-29), he took on the directorship of the Los Angeles Philharmonic (1929-33), then succeeded Nikolai Sokoloff in Cleveland (1933-43). Rodziński developed a reputation as an orchestra builder that led to his being tapped to select and train the fledgling NBC Symphony in preparation for Toscanini’s arrival in late 1937.

Upon the death of longtime director Frederick Stock in 1942, the Chicago board first turned to Rodziński to see if he was interested in leaving Cleveland for the Windy City; but before they made a concrete offer, he was snatched up by the New York Philharmonic to replace Barbirolli, beginning in 1943. When the CSO’s second-choice pick, Désiré Defauw, proved disappointing, the board turned again to Rodziński. By that time, the conductor had run into clashes with the Philharmonic’s management that were to lead to his departure for Chicago at the end of the 1946-47 season.

Almost immediately, Rodziński was at odds with the head of the CSO’s board, steel magnate Edward Ryerson, who was also a principal contributor to the orchestra’s finances. The conductor announced an ambitious schedule which featured several opera performances, including a Tristan which would mark Kirsten Flagstad’s first U.S. appearance after the end of the war. He also floated the idea of moving the ensemble’s concerts from Orchestra Hall to the superior acoustics of the Auditorium of Roosevelt College, which was a non-starter to the board. His efforts to replace some players in the orchestra ran into Ryerson’s personal veto.

The situation came to a head in January, 1948, when Rodziński had to bow out of a performance for health reasons. The following day, the board announced that his contract would not be renewed. The conductor served out his remaining time there with support from the press and the public; but he was never again to be named music director of any organization.

He left behind a handful of recordings for RCA Victor, made over just three sessions in the fall of 1947. (There might have been more, save for the second Petrillo Ban which sidelined recording activity in the U.S. for nearly all of 1948.) Principal among these was his only recording of Also Sprach Zarathustra, and the Tristan Prelude and Liebestod, the latter recorded immediately after his much-lauded complete performance. The opera had a particular place in the conductor’s heart. On his deathbed, he told his wife, “I might not have done it as well as others have in my lifetime, but no one has ever loved it more than I have.”

After leaving Chicago, Rodziński made Europe his base of operations. In 1952, he signed with the U.S. budget label, Remington Records; but the fruit of this agreement was only a single LP, credited to the “Austrian Symphony Orchestra” under the direction of “Conductor X”. The original LP notes suggested that the obfuscation was necessary because the maestro involved had forgotten a prior contractual commitment that precluded his appearance on another label; but the real story is that American Federation of Musicians head James Petrillo threatened a boycott on further Rodziński performances in the U.S. if the record were issued. To avoid the problem, the compromise was to issue the disc anonymously. 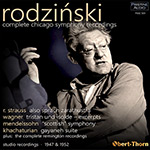