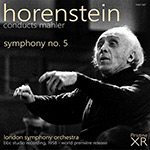 ﻿NB.The present studio recording of 30 October 1958 preceded an unrecorded concert performance with the LSO two days later, on 1 November. This is a review of that performance:

DR. JASCHA HORENSTEIN, who opened the Leeds Festival three weeks ago returned to the Town Hall on Saturday night to conduct the London Symphony Orchestra in Mahler's 5th Symphony. This time there was no suggestion of diffidence, no thought of his filling the breach in the absence of another conductor. Horenstein is a great Mahlerian: the symphony had been exhaustively rehearsed in London for another purpose beside the performance in Leeds, and the large audience (the " House Full " notices were up long before the concert began) was thus authoritatively initiated into a new musical experience.

When the Hallé Orchestra bring Mahler's vast 2nd symphony to Leeds next March we shall have enjoyed a notable Mahler season in this city: but since the 2nd symphony has an unmistakable programme, and a choral section, listeners may not experience the bewilderment that settled on some of them when hearing the 5th. At the first pause, which divides the separate parts of the 5th Symphony's opening section, many programme pages were turned on Saturday by people who thought the first movement must have ended: the idea of an opening funeral march extended over 15 minutes had plainly not occurred to them; they were clearly not accustomed to Mahler's huge architectural opus, nor at all adjusted to his enormous time scale.

Another source of puzzlement seemed to be Mahler's actual thematic material—or lack of it, as somebody said. Lengthy themes entail lengthy developments: so much we know from Elgar. But what when, apparently. there are no themes, or rather a multitude of fragmentary ideas that stop and start, break off and renew themselves, or suddenly change places with each other in arbitrary fashion? These seemingly disruptive elements in Mahler's style do indeed show a layout of exposition, development, recapitulation, but it is not that of Beethoven or Schubert, and the listener not prepared to enter into the style and spirit of Mahler, to see this revealed heart of the composer, in the wider sense as related to nerve, muscle, body, head and mind of Mahler, is never likely to understand him.

On the surface of the text of course appreciation was keen enough; there is enough of melody, of orchestral excitement, of deliberate polyphony, to keep listeners attentive at almost any level, and the great ovation given both to conductor and orchestra at the end of the 80-minute work itself proclaimed the effectiveness of the Mahlerian magic.

Horenstein's understanding of the music was certainly excellent. He did not, in fact, break up the work into meaningless fragments, but joined each to each in a continuing flow of musical interest, imparting life and breath to the score in its many transitions of mood and temper, ministering to Mahler's fussy requirements with absolute fidelity (even to the "long pause" between the movements) and drawing from the LSO playing of the utmost clarity and distinction, lovely in phrase and gorgeous in gesture, or snarlingly abrupt in the more stinging sections.

The fragile Adagietto was played with infinite tenderness and Mr. Barry Tuckwell's horn solos in the trio fell on the ear with a golden splendour. Without haste, without any kind of pose or self-conscious emphasis, Horenstein built up the symphony as the intensely spiritual thing it is, from its Faustian opening to the last brassy glories of its finale, and by so doing impressed us by his own art as well as by Mahler's. We hope he will come to Leeds again, with one of the other less-known Mahler symphonies.