Considering that Artur Rodziński and Rudolph Serkin were major musical figures in the United States in the 1940s I have only been able to document them performing together three times. Two of those concerts are presented here, the other, a 1940 Lewishon Stadium concert in 1940, does not appear to have been recorded. Both Rodziński and Serkin were born into the multi-national and multi-ethnic Austro-Hungarian Empire. Rodziński was born in Split, Croatia in 1892, though he grew up in the Polish city of Lwów while Serkin was born in Bohemia in 1903.

Rodziński came to the US in the 1920s under the patronage of Leopold Stokowski. He assumed the successive directorships of the Los Angeles Philharmonic (1929-33), the Cleveland Orchestra (1933-43), and the New York Philharmonic (1943-47) and helped to recruit and train the members of the NBC Symphony Orchestra for Toscanini in 1937. Although he had tempestuous relationships with managements throughout his career, on the podium he was renowned as a gifted technician. One of Rodziński’s significant innovations was his willingness to present performances of operas to his concert audiences, including an abbreviated Elektra in New York in 1937 with Rosa Pauly and the final act of Die Walküre in 1945 with Helen Traubel. He made some commercial recordings, but those from the 1940s are not very well known and have not remained as consistently in the catalogue as those of some of his contemporaries. Live recordings offer us a much deeper appreciation of his conducting talents and not only were there regular broadcasts throughout his tenure in New York, the Carnegie Hall recording company also made in-house recordings of many live performances in the 1940s. The Brahms concerto in this release in one such in-house recording.

Rudolf Serkin made regular guest appearances in the US from 1933 onwards before immigrating permanently in 1939 to escape Nazi persecution due to his Jewish heritage. In 1936 he made his New York debut creating, according to Olin Downes, that ‘very rare’ occurrence of a soloist who could ‘match an orchestral interpretation directed by Arturo Toscanini.’ His first New York solo recital in 1937 was described as ‘sensational’ with the New York Times praising his ‘magnificent control, and … sovereign sense of form.’ Given his long life (he died in 1991) Serkin unsurprisingly made a vast number of commercial recordings, many in stereo in ideal studio conditions. His live recordings, particularly from his early years, have received far less circulation but they capture his complete mastery of style, and the ‘tonal subtlety’ he was famous for, with the added excitement of being captured exactly as the audience heard it. And for Serkin the audience was key. He once remarked ‘I don’t believe too much in style. If the performance doesn’t move you, it’s a bad performance.’

Serkin with Rodziński in New York 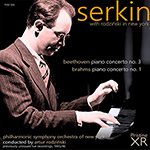