STOKOWSKI
conducts a British Music programme at the NBC


British-born Leopold Stokowski came into the world in what is now called New Cavendish Street in London, just a block away from the BBC's Broadcasting House. He attended St. Marylebone School, just up the road, and sang in the choir of the adjoining St. Marylebone Parish Church. It was here, as a 12-year-old choirboy, that he took over the performance of a church service, perhaps choral evensong, when the regular choirmaster failed to show up. The experience gave him a sleepless night and instilled in him an overwhelming desire to become a conductor. He related these early conducting ambitions when choosing his 'Desert Island Discs' for the BBC radio show of that name in 1957 (it's readily available on YouTube!).

His musical precocity took him to the Royal College of Music in 1895 where, at the age of 13, he was the youngest student at the time to be admitted. Two of his fellow organ students, both a few years older, were Gustav Holst and Ralph Vaughan Williams. These two were already firm friends, both having a strong interest in English folk music. Stokowski's teachers at the RCM included Sir Hubert Parry and Sir Charles Villiers Stanford. Needless to say Stokowski could not remotely have anticipated that one day he would be performing works by all four of these composers for American audiences.

In 1902, the young Leopold became the organist at St. James's, Piccadilly. Here he attracted the attention of the rector of St. Bartholomew's in New York City. He had come to England to find a new music director for this immensely fashionable church and was so impressed with the colourful individuality of Stokowski's organ playing that he immediately offered him the post of choirmaster.

Stokowski duly took up the appointment in 1905 and it was in the USA that he made his career and where in 1915 he became an American citizen. During those early years he spent his summers in Europe studying conducting. As a result, his ambition to become an orchestral conductor was fully realised in 1909 when he made his debut in Paris. The Cincinnati Orchestra was looking for a new conductor and their representatives who heard the concert were so impressed by the youthful maestro's "remarkable qualities" that he was immediately offered the job.

Stokowski's three-year apprenticeship in Cincinnati found him starting as he meant to go on. He studied and learnt the basic repertoire but he also included much that was being written by living composers. When it came to English music, Elgar's made its first appearance in a Stokowski / Cincinnati concert with the Pomp and Circumstance March No. 1 in 1911. Later that year, on 24 November 1911, came one of Stokowski's innumerable US Premieres when he introduced Elgar’s 2nd Symphony to America. The Cincinnati Times-Star was unpersuaded of the work’s merits: “The composition is pleasant and interesting; but it is not great, nor in any sense convincing.” Maybe that view still holds good even today, since none of the great American orchestras have yet made a commercial studio recording of the work!

In 1912, Stokowski left Cincinnati for Philadelphia where he conducted Gustav Holst's music for the first time with a performance of the Japanese Suite on 15 October 1925 in yet another US Premiere. He returned to Holst's music in 1934 when, on learning of the composer's death, he conducted The Planets by way of a tribute.

His next performance of The Planets came about during his three-season appointment as the NBC Symphony's chief conductor following Toscanini's temporary withdrawal in 1941. The war had its own influence on Stokowski’s NBC programmes and he often advocated music from the Allied countries. England was duly represented on 14 February 1943 by what the New York Times described as “a remarkable performance of Holst’s great mystical tone-poem.” The critic from the daily Brooklyn Eagle added that "Stokowski knew, of course, how to show The Planets their orchestral brilliance most graphically, while the orchestra lent its virtuosity to a good cause."

A previous incarnation of this same NBC performance several years ago elicited from critic Andrew Achenbach that it was “a Planets crammed full of interpretative incident, superbly played by a legendary orchestra ... Stokowski’s broadcast evinces a giant theatricality and abundant zeal that prove hypnotically compelling.”

Stokowski returned to the work in 1956 when he made its first stereo recording in Capitol's 'Full Dimensional Stereo Sound' with the Los Angeles Philharmonic. This reading proved controversial in several ways and was given short shrift in the Gramophone by Trevor Harvey who in any case confessed in print that he was no admirer of Stokowski. Even so, the LP's total sales, on the original Capitol label together with its Music for Pleasure reissue, reached nearly half-a-million copies in the UK which wasn't bad going!

Stokowski's next traversal of The Planets took place in the Royal Albert Hall in 1963 with the London Symphony Orchestra. The programme was all-British, with John Addison's Carte Blanche Ballet Suite and Vaughan Williams's Tallis Fantasia occupying the first half and Holst coming after the interval. This time, as was often the case in those days, the critical reactions to a "live" Stokowski performance could be quite different to the reviews of one of his LPs. For example, one commentator wrote of his LSO performance of The Planets that "Stokowski evoked, with scarcely a vehement gesture, gusts and storms, winged chatter, whimsical heartiness and the mystery of voices dying in space," while another described him as "a marvellous conductor; individual certainly, eccentric even on occasion; but capable of achieving unique, exciting and vastly stimulating results."

But to return to the war-time NBC seasons and A Shropshire Lad by George Butterworth. Doubtless Stokowski had heard Sir Adrian Boult's performance in an all-British NBC broadcast in 1938 and decided to revive it himself. Butterworth's idyllic orchestral rhapsody was to prove highly influential on several British composers but as with the seven performances on Pristine's "Wartime NBC Premieres" release (PASC 536) this was the only occasion on which Stokowski conducted the work.

So to Vaughan Williams. Stokowski was - as with so many living composers at the time - something of an RVW champion as far as American audiences were concerned. He introduced A Pastoral Symphony (RVW's 3rd) to his fellow Philadelphians in 1924 and followed that with the Tallis Fantasia two years later. He gave a blazing performance of the 4th Symphony with the NBCSO in 1943 and made the first recording of the 6th with the New York Philharmonic in 1949. He performed the Sinfonia Antartica in Houston in 1954 and played No. 8 in London's Royal Festival Hall in 1957 in the delighted composer's presence. The following year, on hearing of Vaughan Williams's death, he paid tribute by conducting the US Premiere of RVW's last Symphony, his Ninth.

This leads us to the final work in this NBC selection and something of a rarity it is too! The original score of the Fantasia on Christmas Carols requires a baritone soloist, a choir and an accompanying orchestra. However, it was also published in other formats, including a version with a string orchestra and organ supplying the accompaniment, or just an organ or a piano on its own.

Vaughan Williams's Serenade to Music had also been published in several formats, the original being for 16 voices and orchestra, though the work can also be performed by orchestra alone. We can only speculate on Stokowski's decision in the run-up to his Christmas 1943 concert but it seems likely that he took his cue from RVW's own orchestral version of theSerenade to Music and adopted the same procedure with the Carols Fantasia. It therefore seems probable that he asked an NBC 'house copyist' to cue the vocal parts into the orchestral ones. Thus, for example, the baritone solo at the start is played by a bassoon, while the first choral entry is taken over by the strings. This orchestral version proves an effective alternative to the choral original and one wonders why Stokowski's idea hasn't been adopted and published, so that other orchestras can play it in their own Christmas concerts! 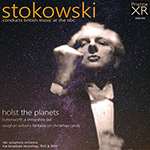