The Russian Revolution of 1917 brought an end to fighting on the Eastern Front. Technically Austria-Hungary emerged as one of the victorious powers, but it turned out that it was only the war that was holding the empire together. The large, polyglot and multi-ethnic empire rapidly fell apart as individual segments struggled for their own independence. One of the new states that emerged in 1918 was Czechoslovakia and so this year, 2018, marks the centenary of the nation’s founding.

George Szell is announced as a Czech conductor for this 1941 NBCSO broadcast, presenting an entire programme of Czech music. The latter is true, the former claim requires clarification. Szell was born in Budapest in 1897, so by birth he was a Hungarian. He grew up in Vienna, and his early conducting career was spent in both France and Germany. However his longest residence, before settling in America, was in Prague as director of the opera between 1929 and 1937, and this seems to be the source of the claim for Czech citizenship. Szell had ended up in the USA partly by accident. He was in transit from Australia to Europe when war broke out and ended up staying in the USA, eventually for good. In 1941 his most pressing need was to find work, and having already declined two invitations from Toscanini to conduct the NBCSO due to prior commitments, he readily made himself available in the spring of 1941. Szell knew that these four nationwide radio broadcasts could establish him as a notable conductor in America. Claiming Czech citizenship (now an occupied country), rather than Hungarian (a country allied with Germany), might have been a deliberate decision, but whether that was Szell’s choice or NBC’s is not known.

Szell’s first NBCSO concert, the week before the one presented here, was warmly welcomed in the press. The New York Times though he had ‘established himself as a conductor of truly distinguished abilities.’ For the Czech concert, Szell decided to orchestrate Smetana’s String Quartet in E minor, believing that ‘it deserves wider musical horizons in orchestral form than are possible...for the string quartet.’ Two Dvořák pieces were selected to commemorate the composer’s centenary. The all-Czech programme was, as one listener noted ‘eclectic’, but confirmed the opinion that Szell was ‘evidently a conductor of the highest rank.’

Although Toscanini grumbled about Szell’s rehearsal technique, he evidently held his younger colleague in sufficiently high regard to invite him back for two more NBCSO concerts in 1943. By then Szell had begun a very successful three-year stint at the Metropolitan Opera as well as undertaking guest conducting in Boston, Los Angeles, and New York. In 1944 he began an association with the Cleveland Orchestra that would last until his death in 1970.

Due to time constraints all announcements made between performances have been cut, retaining only those at the start and end of the broadcast. 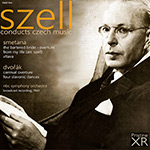 It is not possible at the hour of writing to say as much about the remarkable performances of Mr. Szell as they deserve. He is evi­dently a conductor of high rank. As much was manifest at his first con­cert with the NBC Symphony Or­chestra of a week ago, when he gave an eclectic program. Last night the program at Radio City with the same orchestra was entirely of music by Czech com­posers.

The observance was appropriate in more ways than one, first be­cause of the inspiration, the sincerity, the special eloquence and beauty of these works; secondly, because this year of 1941 is the hundredth anniversary of Dvorak, whose mu­sic figured prominently on the program; lastly, because the spirit of the great Czech people is impres­sively manifest in their music, which Mr. Szell conducts with a fascination that we have not heard equaled.

The program began with the over­ture to "The Bartered Bride." We heard its continuance in the form of the last part of Mr. Szell’s own orchestral transcription, new to the American repertory, of Smetana's String Quartet, "From My Life." This is an admirable transcription, of refreshing simplicity and appro­priateness, after the bedevilments and distortions of other quartet mu­sic that we have heard inflated for orchestra. Mr. Szell's instrumenta­tion does not inflate; it reveals it as if the composer had dreamed of just such an instrumental guise for his ideas.

So instrumentated, and interpre­ted, it was wonderfully fresh and delightful music, full of genius. Why Dvorak’s "Carnival" overture was played when his overture, "Husitka,” less known, much more dramatic, much greater, was un­doubtedly available, is not easy to explain. Mr. Szell, with complete conductor's mastery, made much of a relatively weak and conventional work, in a way that excited the audience. But what was of more consequence was the performance of four of the Dvorak Slavonic Dances and the tone-poem, '‘Vltava" of Smetana.

It is now the fashion to look down upon the Dvorak dances and the tone-poem, too, at least on the part of our "avant-garde” of the symphony art. Nothing appears more short-sighted and fallacious. A whole world is opened by the Dvorak Dances, which are of inex­haustible variety, inventions, orig­inal and unduplicated orchestra­tion, and sheer beauty. These pieces, and the work of Smetana, come from what may well be called a golden age of Czech music; and it may be forgotten that Czech music and Czech musicians permeated the music of the classic epoch of the Viennese school and were the fer­tile ground from which many of its finest characteristics developed.

From what Mr. Szell did with these works we anticipate very much of his reading next week of the great Schubert C major sym­phony. For there is much closer relation between Dvorak and Schu­bert than is commonly realized, and Dvorak and other great masters too, as there is a heroic authenticity and smack of soil in Smetana's tone-poem which are invincible. Mr. Szell, in a unique degree, knows how this music should be played and how to make an orchestra play it. And here was that spontaneity, integrity, naturalness and creative glow that American music has yet to attain.