It is difficult to believe that it was not until 1921 that the first recording of any portion of a Brahms symphony appeared on disc: the third movement of the Brahms Third Symphony, abridged to one 78 rpm side, and played by Leopold Stokowski and the Philadelphia Orchestra.  When electrical recording appeared, the conductor went on to pioneer the earliest Brahms symphony cycle, beginning with the First in 1927 (Pristine PASC 500).

The Third was the next in the series to be recorded.  Like the First, it was the symphony’s première electrical recording; but it was also the work’s first complete recording.  It was hampered in two respects:  by a finale which begins with an unusual (for Stokowski) lack of energy, and only really catches fire toward the end; and by the abrupt and frequent volume level changes imposed by the original engineer.

“Gain riding” was something of a necessary evil at the time in order to avoid loud passages causing a record to fail the “wear test”; but the recordings Victor made in late 1928 (including Mengelberg’s Ein Heldenleben as well as the present set) took knob twiddling to an irrational extreme, with volume levels suddenly going up and down seemingly at random throughout the set.  Modern technology and painstaking, sometimes note-by-note work in this transfer have finally removed at least the most objectionable of these fluctuations, allowing listeners to hear it in an untampered form for the first time.

Despite its drawbacks, the set remained in the Victor catalogue through the end of the 78 rpm era, even making an appearance on RCA’s Camden LP label in the 1950s.  The reason for both was probably the lack of a Stokowski remake until his Houston Symphony stereo LP appeared in 1959.  While the conductor made several studio recordings of the First and Fourth Symphonies, the Second and Third only have two apiece; but unlike any of the other symphonies, live recordings of Stokowski in this work have not been forthcoming on CD, save for a private release of a 1941 NBC Symphony broadcast.

The Dvořák “New World”, on the other hand, was frequently recorded by Stokowski throughout his career.  The version heard here was already his second electrical recording with the Philadelphians, superseding a 1925 effort with reduced personnel and acoustic-style re-orchestration.  Like some other sets made by Stokowski and the Philadelphians in 1927 (the Beethoven Seventh, Brahms First and Franck Symphonies), it was accompanied in its American release by a separate disc with a discussion of the work spoken by the conductor.  Unlike the Beethoven and Brahms discs in which Stokowski assumed both the speaking and piano-playing roles, the pianist here, uncredited on the original discs, was his Philadelphia assistant, Artur Rodzinski, in his first recording session.


Producer and Audio Restoration Engineer:  Mark Obert-Thorn
Cover artwork based on a photograph of Leopold Stokowski 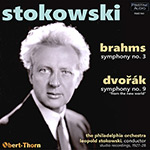 On every level, the orchestral execution and imaginative expression testify to a virtuoso display of American musicianship

Mark Obert-Thorn restores two milestones in the many electrical recording career of Leopold Stokowski and the Philadelphia Orchestra, opening with the 25-26 September 1928 Brahms Symphony No. 3 (1883) that formed part of the cycle he pioneered. The first movement introduces the F-A-flat-F motif that will spur a development that becomes cyclical by journey’s end. Stokowski drives the first movement hard, omitting the repeat but charging his strings and horns—moving in the dark, minor mode of F—with emotional urgency. The Philadelphia clarinet intones the second subject in A Major, inserting the natural A to reduce the gloom or tragic subtext of this work. Some commentators feel the movement pays homage to the “Rhenish” Symphony of friend and mentor Robert Schumann. The lovely second movement, Andante, follows sonata-form like the first, here in C Major that finds a reply in A minor. Stokowski opts for a measured, slow tempo, but the richness of his ensemble more than compensates in its full homogeneity of tone. In his notes for the release, Obert-Thorn indicates the sheer drudgery of having to compensate for the frequent volume-level manipulations in the original lacquers. The haunted calls of the second theme disappear in the recapitulation but will recur in the last movement. The low strings, winds, and horn combination at the coda testifies to the transparency and beauty of the “Stokowski sound.”

The third movement Poco allegretto provides a sensuous waltz that Katherine Hepburn and Robert Mitchum find compelling in the movie Undercurrent. Stokowski injects an air of mysterious melancholy into the main theme and its barely contrasting trio section, allowing his strings their nuances of expression until the French horn returns us to the opening motif. The evocation of the deep woods seems palpable from the horns and winds amidst the pizzicato in the strings. Stokowski indulges a bit of rubato in the last pages, though not so exaggerated as we find in Mengelberg and his Concertgebouw players, the other great proponent of Brahms in this era. Stokowski’s opening for the final movement Allegro – Un poco sostenuto feels sluggish and grimly “monumental” at first. The F minor sensibility weighs heavily, even into the C Major entry of the second movement motif. The advent of the “Beethoven Fifth” interjections might weaken the work’s claim to musical independence, but the working out in sonata-form of the motivic stretti proves masterful, winning the unqualified and life-long devotion of Sir Edward Elgar. Stokowski releases the tempo and his own, taut grip on the work as the development approaches the coda, which dispels the somber shadows and dissolves in streaks of clear, F Major intimations of immortality.

Stokowski provides his own commentary (6 October 1927) on “the symphony of America,” as he defines the Dvorak Ninth. Artur Rodzinski, assistant conductor for the Philadelphia Orchestra, illustrates the various tunes on the piano. The “Outline of Themes” appeared as part of M-1, the 78 rpm set that included the full version of the symphony. Stokowski credits Western, Indian, and Negro influences for the music’s inspiration but downplays the composer’s strongly nostalgic Bohemian roots. Stokowski claims Negro jazz as an element that provides rhythmic life to the Scherzo.

The immediacy of the restored sound commands our attention for this classic performance (5 and 8 October 1927), with Stokowski’s driving the opening Adagio hard into the ensuing Allegro molto. The clarity of line, forward motion, and starkness of the individual, instrumental contours could suggest either Toscanini or Szell as their progenitor, except that the lush transparency of color usually stands at the polar opposite of such characterization. The Philadelphia English horn lovingly intones the moody, Negro folk evocation of the “Goin’ Home” motif of the Largo. The interweaving of themes and countermelodies assumes an almost mystical character in this polished rendition, evincing mere hints of the portamento that “romantic” interpreters utilize. The chamber music effect prior to the coda projects a warm intimacy for the Indian love song, over which the Philadelphia brass impart of tender chorale that evaporates into the strings.

Besides the striking rhythmic vitality of the Scherzo, savor the virtuosic character of the divided strings, both in pizzicato and leaping runs. The ferocity of line and its sudden pulling back indicate the taut control Stokowski exerted, a rival to the discipline Mengelberg commands in Amsterdam. The Trio, too, displays a capacity for nuance and diverse transparency of texture that warrant envy for their sonorous control. Before the movement ends, the deep tones of Stokowski’s low strings have their say, and the energized flourish at the coda in the brass over tremolando strings makes a decidedly dramatic close. Stokowski makes the introductory bars of the finale, Allegro con fuoco, sound like something out of Mussorgsky. The dramatic resolve of the flurry of motives establish a momentum that might even suggest moments from Wagner, especially in the grumbling bass line. The various antiphons Dvorak manipulates for the colossal development enjoy a sonorous festival under Stokowski, moving to explosive climaxes. The extended coda does betray that “creamy” ripeness that belongs to the Romantic school of interpretation, but the sincerity and force of expression more than carry us away, convinced by the rightness of the style. On every level, the orchestral execution and imaginative expression testify to a virtuoso display of American musicianship.
—Gary Lemco

This article originally appeared in October 2018 at Audiophile Audition