This new volume of unreleased Jascha Spivakovsky recordings features the Russian-born émigré to Australia in magnificent broadcast performances of two great works by Beethoven. These readings of the great composer’s final two piano concertos find Spivakovsky in his twilight years playing with a fusion of unwavering technical prowess and musical depth, his half-century of concert experience infusing his readings with conviction and command.

This recording of Beethoven’s Piano Concerto No.4 in G Major, Op.58 comes from an ABC Radio studio broadcast in Melbourne made on January 7, 1961 with the Victorian State Orchestra conducted by Clive Douglas. The circumstances surrounding this reading are rather remarkable and moving: this is the first performance Spivakovsky gave after the surgery that nearly killed him a mere six weeks earlier, the pianist leaving his sickbed for the first time when his son drove him to the studio for the rehearsal and performance. Listening to the recording, one would never know that he had been ailing or had not practiced since his surgery, nor that there had been only one run-through just prior to the actual broadcast. Apparently the conductor had missed several entries in the rehearsal, leading Spivakovsky to beat pulses more strongly at times to improve the likelihood of the orchestra entering on time. The excellent sound of this broadcast captures to perfection the crystalline piano tone praised by legendary critic Neville Cardus, and Spivakovsky plays throughout with exquisite clarity and subtle pedalling (the second movement is sublime) in an interpretation that combines refined nuancing with earthy robustness, reflecting Beethoven’s own bridging of divinely inspired music with the physical world.

Beethoven’s Emperor Concerto hails from a January 18, 1953 broadcast on the BBC General Overseas Service as part of the ‘Concerto’ series with the BBC Scottish Orchestra conducted by Ian Whyte. The performance, given in front of an invited audience of 100 people, was captured via shortwave and therefore suffers from limited sonic fidelity. In 1959 Spivakovsky would give another broadcast of the work for the BBC in vastly better sound, but the pianist himself was not permitted to obtain a copy due to regulations requiring that the source material be destroyed after three transmissions, so the present release uses the only known recording of the artist in this concerto. As in all of the pianist's Beethoven performances, his rhythmic pulse provides propulsion without sacrificing lyricism, harmonic and melodic elements are clearly delineated, and voicing is uncannily transparent, resulting in a grand and heroic interpretation of this popular work.

These riveting performances by Jascha Spivakovsky are a significant addition to his discography and give the listener a greater appreciation for his unique musicianship and pianism. 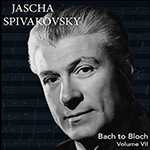