Although the music of Prokofiev first entered Jascha Horenstein's repertoire in the mid-1930s during his tours of the Soviet Union, it was not until the 1950s that he devoted serious attention to the Russian composer's work. The stimulus occurred when he was invited for two concerts with the Orchestre des Concerts Colonne in Paris that featured two “memorably nasty“ performances of Prokofiev's Fifth Symphony, which he conducted for the first time on 22 October 1954 to clamorous critical and public acclaim.

Thereafter Prokofiev's Fifth Symphony, together with the First and the Suite from Lieutenant Kijé, albeit to a lesser extent, featured prominently in his programs, including at his UK debut in 1957. Other works by Prokofiev in his repertoire included the two violin concertos, the Third Piano Concerto and the Sixth Symphony, but of these only the piano concerto, with soloist Gabriel Tacchino, was recorded.

Shortly after the two concerts in Paris, Horenstein embarked on what he called "a vast recording program" with the Colonne Orchestra for Vox Records that included all the works featured in this release as well as his celebrated recordings of Ravel's two piano concertos with Vlado Perlemuter. The result were performances notable for the spirited playing, energy and great flexibility of the orchestral execution, and, unusually for Vox, for the vividly recorded, well-balanced sound.

With the exception of the suite from Chout, its first recording and a piece he learned for this occasion and never repeated, all the works on this disc occupied an honored place in Horenstein's regular repertoire although the Fifth Symphony, which he conducted many times and in many countries to highly favorable reviews, was his absolute favorite by far. 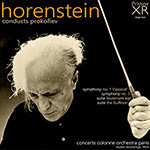 Horenstein persuades the Concerts Colonne orchestra into an outstanding performance [of Prokofiev's Fifth Symphony]. Particularly the strings shine, who play with intensity and attack; and the trumpets, happily, are free from the vibrato which disfigured the Danish orchestra's playing of the work. Vox, too, have contributed one of their best recordings: there is brilliance, depth, and clarity throughout. This in spite of a compression which allows the Classical Symphony to be included by way of fill-up. Here, too, the performance is startlingly good, with point and style out of the ordinary; and in particular a care for balance that allows some rarely heard points of importance for once to pull their weight. This version of the Classical I would class with Malko's on H.M.V. as top of the list for that particular work of enchantment. And the present disc as a whole I would certainly suggest for the top of any Prokofiev enthusiast's list under any circumstances it is a fine achievement musically, technically, and economically.

But even greater degrees of excellence, in nearly every respect, are to be had from Horenstein's Vox version of Prokofiev's Fifth Symphony, a three-year-old record that was exceptional in its day and remains so even in the face of the new competition. It offers, too, a very substantial Classical Symphony, done very winningly.