The French-Romanian composer Marcel Mihalovici (1898 – 1985) and his wife, the pianist Monique Haas, were personal friends of Horenstein's from the time of his sojourn in Paris following the Nazi rise to power. The Sinfonia Partita by Mihalovici, an almost forgotten voice today, is a powerful, neoclassic work for string orchestra composed in 1952 that synthesizes French and Eastern European influences. The present performance by Horenstein, its French premiere, was given shortly after the world premiere in Baden-Baden under Hans Rosbaud, and formed the opening item of a concert that also included the French premiere of Alban Berg's Altenberg Lieder. In both cases the resultant recordings, first released on Pristine (PASC445), are world premiere publications.

If the number of his performances is any indication, Horenstein's favorite works by Stravinsky were the Firebird Suite, which he conducted dozens of times, followed by the Symphony in Three Movements, which first entered his repertoire in 1956 and which here receives a bracing, bitingly acerbic performance recorded live in 1961. According to the conductor Joel Lazar, “For those who associate Horenstein with the effortless fluency encountered in his Mahler and Bruckner slow movements, the ferocity and rhythmic drive of his performance of Stravinsky’s Symphony in Three Movements will come as a shock. This sort of sheer energy was, however, always one of his interpretative options, quite unrelated to tempo.” The performance heard here “features the linear clarity readily apparent in his 1954 Paris recording of Symphony of Psalms,” also published on Pristine (PASC418).

Horenstein first encountered Béla Bartók's music during his Weimar years, which in 1927 included a number of rehearsals for the German premiere of his Piano Concerto no. 1 with the composer as soloist, but neither he nor Furtwängler, who conducted the German premiere, ever returned to the work, a distinct loss to its performance history. The only other works by Bartók in Horenstein's repertoire were the two violin concertos and the Concerto for Orchestra. Although he performed and recorded the latter work on a number of occasions, the only one that has been preserved is the performance presented here, the second half of the Paris concert that included Stravinsky's Symphony in Three Movements also on this disc. “In addition to energy,” wrote Lazar, “Horenstein found lyricism and long line in Bartók’s Concerto for Orchestra, even given the frequently changing phrase lengths and time signatures. Always fascinated and obsessed with interconnections between music of different genres and style periods, he brought elements of the edgy Expressionist sonority and the sardonic, disquieting mood of the composer’s middle period masterpieces to this late work, so often played merely as an orchestral showpiece or as a display of renascent nationalism.

Recordings from the private collection of Misha Horenstein 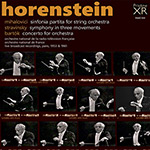 These recordings, from Misha Horenstein's private archive, preserve two broadcasts made by Horenstein. The earlier, mono broadcast of 1953, is in exceptional sound quality, and offers perhaps the only opportunity today to hear this rare work by Marcel Mihalovici.

The second broadcast, which makes up the bulk of the programme here, dates from 1961. Although it has surfaced elsewhere, this is the first time the stereo broadcast version has been released; previously the only option was mono. Hiss levels are higher than I would have liked, though significantly lower than on the source tape provided by Mr. Horenstein. Overall tonal quality is significantly improved over previous issues and this, coupled with the fabulous stereo imagery, makes this an essential addition to any Horenstein collection.