This fifth volume of recordings by Jascha Spivakovsky brings us two fine concerto performances with music by Mozart and Tchaikovsky, eloquently described in our sleevenotes by Mark Ainley.

From a technical perspective these were difficult recordings to restore. Taken from AM broadcasts in 1949 and 1953, they were preserved on exceptionally delicate 78rpm acetate discs. Nearly 70 years later these discs show all the expected signs of wear and tear, as well as the limited frequency and dynamic range associated with such radio broadcasts of the time.

I have brought all the digital tools at my disposal to bear here - including new advances still in development - to try and ameliorate the flaws inherent in the recordings. The results are remarkable given the source material, but there are moments where the listener will have to forgive me for being unable to entirely resolve certain issues.

Nevertheless this remains a hugely important and exceptionally enjoyable release, and a unique opportunity to hear Spivakovsky in an orchestral rather than solo setting. 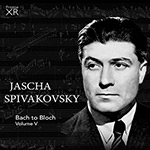 This fifth release devoted to unissued recordings of the great Russian pianist Jascha Spivakovsky is the first to feature concerto performances. Previous volumes sourced from home and radio recordings spanned a two-decade period and a wide array of solo piano repertoire. The focus now turns to live performances with orchestra in two very different compositions, both of which were mainstays in Spivakovsky’s career: Mozart’s Piano Concerto No.23 in A Major K.488 and Tchaikovsky’s Piano Concerto No.1 in B-Flat Minor Op.23.

Spivakovsky played both of these concerti around the world over a period of more than four decades and in fact he often programmed them together: this pairing was featured as early as 1922 in the pianist's final appearances on first Australian tour. This release is therefore a particularly appropriate introduction to Spivakovsky’s versatile performance style with orchestra.

This performance of the Mozart A Major Concerto derives from a March 13, 1953 broadcast of a BBC studio recording with Clarence Raybould conducting the Royal Philharmonic Orchestra. Spivakovsky’s Mozart, as previously heard in his reading of the Sonata in F Major (issued in Volume 2 of this series), is sensitively nuanced yet never lapses into sentimentality. Playing with backbone and directness, Spivakovsky traverses the work with tremendous rhythmic momentum without compromising clarity of articulation. His elegantly shaped phrasing, sparkling sonority, and poised interplay of voicing (textures are beautifully transparent and lines crystal clear) reveal the beauty of Mozart’s writing self-consciousness or pretension. After Spivakovsky’s 1948 Melbourne performance of this work under Paul Kletzki, The Herald stated that the pianist had “demonstrated a rich and delicate touch and mature feeling for the deep humanity that lies beneath the exquisite exterior of Mozart’s style,” while Lady Edith - wife of legendary British critic Sir Neville Cardus - telegrammed him after his 1945 Sydney performance of the work, calling it simply “the best Mozart playing I have ever heard.”

Spivakovsky played the Tchaikovsky First Concerto some 400 times over a four-decade period, from his early concerts in Germany (a 1919 Darmstadt performance with Furtwängler among them) to the last years of his international career in the late 1950s. This October 1949 ABC broadcast (among the earliest Spivakovsky recordings released thus far) features the pianist, together with the Victorian Symphony Orchestra conducted by Sir Bernard Heinze, in an impassioned reading of the warhorse. What tremendous flair and bravura (not in the debased sense of the word, but rather a seamless fusion of virtuosity and musicality): volcanic octaves and dazzling runs are heard alongside exquisitely phrased lyrical passages, the entire performance featuring expansive rubato and gorgeous tonal colours. In 1922, the Sydney Morning Herald had noted that “his crashing chords, retaining always their clear-cut beauty, stood out even above the full strength of the orchestra,” while thirty-five years later a Hawaii critic stated that “only Spivakovsky could have interpreted the B Flat Minor … with such precision, perfection, and poignancy. To say that his technique is out of this world is putting it tritely. His playing is majestic.”