Stokowski and Rimsky-Korsakov were truly a match made in musical heaven. The composer’s exotic orchestral colors, lush Romanticism and lively rhythms played to the conductor’s strengths. It is no wonder, then, that the composer’s works – and Scheherazade in particular – feature prominently in Stokowski’s discography.

Stokowski recorded abridged movements from Scheherazade acoustically with his Philadelphia Orchestra as early as 1919 (on Pristine PASC 476), and made the first electrical recording, reissued here, in 1927. He went on to re-record it, again in Philadelphia, in 1934 before making a still-unpublished version with the All-American Youth Orchestra in 1941. His next three recordings, all from the LP era, emanated from London: a 1951 version with the Philharmonia Orchestra; a 1964 Decca “Phase-4” recording with the London Symphony; and a final version in 1975 with the Royal Philharmonic.

All of the recordings reflect the same general outline of the conductor’s interpretation; but the 1927 version is prized for being the lithest, swiftest and most energetic of the lot. Stokowski is aided by the crack first-desk team of the orchestra of the time, particularly concertmaster Mischa Mischakoff, clarinetist Daniel Bonade and oboist Marcel Tabuteau.

Shortly after the original recording was issued, four of the ten sides (Sides 1, 2, 4 and 6) were dubbed due to blasting problems. Sides 1, 2 and 6 are reproduced here from original undubbed “Orthophonic”-label pressings. They are noticeably noisier than the remaining sides, which were taken from vinyl test pressings and (for the last side) a shellac “Z” pressing. According to Richard Kaplan’s Philadelphia Orchestra discography, an alternate take for Side 4 (Take 1) was released. A vinyl test has been used in the transfer of the complete recording due to its better sound, while the other take (Take 3), from an undubbed “Orthophonic” disc, is presented here in an appendix.

Before recording the complete work in October of 1927, Stokowski set down the first movement alone the prior May. This version, unpublished on 78 rpm discs, was spread over three sides with a correspondingly broader tempo. It is fascinating to compare this to the issued version on two sides, in which Stokowski tries to achieve the same overall approach by shortening pauses and subtly increasing tempos to fit the allotted timing without seeming to be rushed. The earlier version, transferred from vinyl tests, is included here before the complete recording.

Stokowski likewise made several recordings of the Russian Easter Overture. The first one from 1929 (reissued here) and the last, with the Chicago Symphony from 1968, are in Rimsky’s original orchestration; but in his middle two recordings (NBC Symphony, 1942; Stokowski Symphony Orchestra, 1953), he used bass Nicola Moscona to sing one of the Russian Orthodox liturgical chants quoted in the work. The prelude from The Maid of Pskov, with its vivid depiction of a storm, was originally credited on the record label as being from Ivan the Terrible. This was the title under which Diaghilev mounted a successful Paris production in 1909 starring Chaliapin, by which the opera became better known in the West.

Producer and Audio Restoration Engineer: Mark Obert-Thorn
All recordings made in the Academy of Music, Philadelphia
Cover artwork based on a photograph of Leopold Stokowski 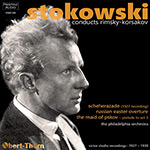