This remarkable historic document demonstrates just how good a recording it was possible to make as long ago as 1942. It must surely rate as one of, if not the best sounding recordings I have ever encountered from that era. Things would improve dramatically in the years immediately after the end of the Second World War, but it is unusual to find such fidelity during the war years, especially outside Germany.

The source for this recording was a set of acetate discs apparently prepared for South American broadcasters which, by the sound of them, were never actually played. Comparisons to other sources, such as those used for a previous issue of this concert, indicate just how quickly and badly these delicate discs deteriorated with use. Indeed the bonus track on this release gives the listener some indication of the difference - taken from the English language acetates we hear the familiar indicators of wear and tear even after extensive declicking and cleaning up in the extended commentary that preceded the NBC broadcast .

By contrast the mint acetates which provide the musical content offer a fidelity one might normally expect from a good late-1950s mono vinyl pressing. For the most part they provided me with a very straightforward task, with XR remastering bringing out the full tonal range of the orchestra, with very low surface noise and an exceptionally full frequency range for an early 1940s recording. As is common with disc recordings there was some gradual loss of treble towards the end of each side, and side changes were pretty brutally chopped, with no overlap to allow for cross-fading. But this aside, the only other challenge was the missing first note! This was ultimately patched in from another "digitally aged" recording of more recent vintage, as my other sources of the Stokowski performance were of such lower sonic quality. The result is a seamless patch and and entirely convincing opening.

It is a shame, but entirely understandable, that we have no 1942 photo of Stokowski and Shostakovich together. As our sleevenotes detail, it's amazing that Stokowski (and a number of other major US-based conductors) were even able to get their hands on a copy of the score. I am very grateful though to Edward Johnson for digging out and sending me the 1958 photograph of composer and conductor which grace the cover of this release. Stokowski was a great champion of the Soviet composer's work. Now at last we have his only recording of the "Leningrad" Symphony in sound which truly does justice both to the work and to the performance.

XR remastering by Andrew Rose
Cover artwork based on a photograph of Stokowski and Shostakovich, taken in 1958 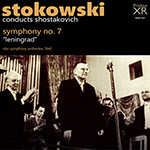 Download Artwork
Download Artwork
Few symphonies have ever had such a dramatic impact on American musical life as Shostakovich’s 7th.  Already well-known internationally as a composer of the first rank, Shostakovich could reasonably have expected his new symphony to gain a wide airing, but the storm of media and public interest was unprecedented. First there was the wartime setting, with much of the music being composed in besieged Leningrad in 1941. Then there was the tortuous process of getting a copy of the score to the USA which involved a microfilm being flown from Moscow to Tehran,  then driven overland to Cairo, and then again transported by plane to the USA. All of these dramas were relayed to public via newspaper and radio reports that helped to fire the public’s imagination.

The man responsible for getting the score to America was Leopold Stokowski, newly installed as the joint director of the NBC symphony together with Toscanini. He persuaded NBC to purchase the rights to the US première, and had a not unreasonable expectation that he would conduct the broadcast première, having premièred several other Shostakovich symphonies with the Philadelphia Orchestra. NBC, however, was urged by Toscanini to have the work performed by him, and despite Stokowski’s pleas to his illustrious colleague, it was Toscanini who conducted the première on 19 July 1942.

The critics didn’t particularly like the new symphony, thinking it lacked the creative power of the 5th.  Olin Downes, writing in the New York Times, thought it was  ‘far from a work of sustained greatness.’ Audiences, on the other hand, loved it, with performances being received with sustained applause and even cheering. Part of the appeal of the symphony was that that it depicted the suffering of war (in the first movement especially) but also the ultimate victory of the allies. The long first movement, with its repeated battle theme that starts pianissimo and grows slowly to the loudest of fortes before fading away, readily grabs the imagination. As Life magazine noted ‘it is almost unpatriotic not to like Dimitri Shostakovich’s seventh symphony’ and during the second half of 1942 the world’s attention came to be concentrated on a vital sector of the Russian front. The Battle of Stalingrad, even at the time, was perceived as one of the pivotal moments of the war: a victory for Germany could mean the end of the Soviet Union, and quite possibly an end to the European war, while a Soviet victory would mark a fundamental shift in the tide of the war in the east. Performing or attending this symphony thus became an act that showed support for the allied cause, and especially embattled Russians.

Following the American première in July the symphony was performed by the Boston Symphony under Serge Koussevitzky in Boston and later in New York; by Toscanini again but this time with the New York Philharmonic; by Artur Rodzinski in Cleveland and New York; by Frederick Stock in Chicago; by Eugene Ormandy in Philadelphia; by Hans Kindler in Washington D.C.; and by Stokowski in Los Angeles and San Francisco. By the time Stokowski performed the work in December with the NBC symphony New York audiences had been able to compare the interpretations of no less than five different conductors.

There was some discussion in the press about the correct tempi for the symphony. Toscanini’s première had come in at about 73 minutes, but when he returned to the work in October with the New York Philharmonic he had trimmed it to 69 minutes. Olin Downes much preferred the faster pace, thinking it added a fresh urgency to the symphony. When Koussevitzky opted for the more moderate tempo, after consulting with the composer, Downes thought that ‘Shostakovich’s metronome doesn’t work as a good, brisk, lively American metronome does, hence misleading tempo marks in the score.’

Stokowski’s performance, as we can hear, tended to be more like Toscanini’s first take, and was a triumph according to one reviewer: ‘The rich colors, the many passages for singing string choirs, the surging pulse of the music, the enormous climaxes all seemed made for Mr Stokowski’s particular genius and he made the most of them. The performance was gorgeous.’ This broadcast preserves the interpretation of a conductor who had a particular affinity with Shostakovich’s music. Stokowski recorded several of Shostakovich’s symphonies commercially and continued to programme his works for the concert hall for the rest of his career. This broadcast, however, is the only recording of Stokowski conducting the 7th symphony.