These two CDs preserve Guido Cantelli's programmes of his last subscription concerts and are valuable for two reasons. First, they contain Cantelli's very last concerts which he gave in America, but second and more importantly three of the compositions - both of the Brahms and the Verdi - were the first time that the conductor had performed these works. Additionally, Cantelli had only conducted the Wagner and Hindemith once: the Wagner was given in Italy during 1945 so it is unlikely that it was recorded but,fortunately, the Hindemith - a new addition to Cantelli's repertoire - was broadcast with the NBC Symphony Orchestra and is available on a Pristine Audio CD, PASC 111.

These two final broadcast concerts conducted by Guido Cantelli were sourced from high quality mono FM radio recordings and offer excellent sound quality throughout. That said, there were some issues with wow and flutter which I was able to deal with using Capstan pitch stabilisation software, and other minor sonic technical issues were easily overcome. Commentaries were quite long between most works, and these have been trimmed down  - at times considerably. I chose, however, to leave the very final closing as broadcast - it was the last time Cantelli would appear on US radio and on a US concert platform. The following month he headed to London for recording sessions with the Philharmonia Orchestra, and for the rest of the year conducted in London, Milan, Johannesburg, Modena and, finally, in Brescia, Italy on 15 November 1956. Nine days later he was to lose his life in a fatal plane crash in Paris, France, having just a week earlier been named Musical Director of La Scala, Milan.

NB. The arrangement of Handel's Largo from Xerxes is attributed by the commentator to the Italian composer Bernadino Molinari, whereas the New York Philharmonic Orchestra's official archive suggests the more common arrangement by Arthur Luck. An examination of the printed concert programme for the evening is of no help - there is no mention here of the arranger (by contrast the Monteverdi arrangement is properly attributed to Ghedini). An examination of the recording indicates that Cantelli does not, in fact, use the Luck arrangement - Luck begins with strings, Cantelli with wind; Luck proceeds with solo violin and harp, Cantelli with solo violin and other orchestral instruments, and so forth. We have been unable to verify 100% that a Molinari arrangement is used here but have no reason to doubt it, despite this contradicting the "official" record. 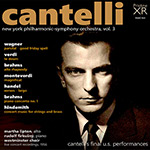 If you love great conducting of great music, make this absolutely a priority, must-have acquisition

This set brings us the last two concerts that Guido Cantelli conducted with the New York Philharmonic—indeed, the final concerts he gave in the USA—before his tragic death on November 24, 1956 in a plane crash. The Brahms Concerto and the Handel and Hindemith selections were performed on April 8, and the other works on April 1. This set is also valuable because only the Handel and Monteverdi works have other performances surviving in Cantelli’s discography; indeed, these were the conductor’s first performances ever of the works by Brahms and Verdi, while he had conducted the Wagner only once before, in 1945. The sound quality throughout the set is excellent; Andrew Rose obviously had access to excellent original sources even before applying his trademark XR sound processing to them.
Even more importantly, with only one exception they are performances of the very front rank. The exception occurs right at the start of the first CD: the Good Friday Spell from Parsifal is prosaic and businesslike, technically well played but completely lacking in atmosphere. After that, Cantelli moves from strength to strength. Both the Verdi Te Deum and the Brahms Alto Rhapsody receive impassioned renditions—the Verdi shows what a grievous loss Cantelli’s premature death was to the opera world—with excellent work by the Westminster Choir matching the instrumentalists of the New York Philharmonic. In the Brahms, Martha Lipton is a very capable soloist, though she lacks the unique vocal profiles and interpretive insights of such great contemporaries as Marian Anderson and Kathleen Ferrier. An unexpectedly fine surprise is provided by Giorgio Federico Ghedini’s arrangement for orchestra of Monteverdi’s Magnificat. A previous performance with identical forces was given on January 6, 1952 and issued in a 12-CD set of Cantelli performances by Music & Arts; there the much inferior recorded sound and more ragged playing and singing made the work something of a trial. Here, it springs vividly to life; if hardly in line with present-day HIP standards for Baroque music, the modern forces make a visceral impact with suitable grandeur. I do wish that the fine solo soprano in the opening lines had been identified.
In the second concert, the ever-popular Largo from Handel’s Xerxes has competition in the Cantelli discography from a December 27, 1953 NBC Symphony broadcast. While the NBC version has more sonic presence and attains an extra degree of rapt intensity, this one is still quite fine on its own terms (although both versions milk the closing bars for overly Romanticized emotion). The Brahms and Hindemith works that follow receive interpretations that are pinnacles of excellence. Cantelli brings both a fiery intensity and passionate lyricism to the orchestral part that far surpasses the somewhat stolid accompaniment that William Steinberg and the Pittsburgh Symphony would provide for Firkušný in an October 1956 studio recording. For his part, the Czech pianist is inspired by his partner to great heights, balancing high drama with ardent songfulness and technically clean execution. This is one of the truly great accounts of this score that belongs in every collector’s library. The Hindemith Concert Music is well-nigh miraculous. I had never expected to hear anyone equal Leonard Bernstein’s fabled 1961 New York Philharmonic studio recording, but Cantelli actually aces him with a stunningly perfect command of Hindemith’s musical rhetoric. He brings out an extra degree of febrile tension in the score by crisp accentuation of rhythms and articulation and keenly balanced contrasts in the often discordant brass harmonies, while the strings have an almost serpentine menace to them. This is now my go-to version for a performance of this marvelous, too little appreciated masterpiece.
As usual with Pristine, only minimal notes are provided. While Andrew Rose has issued many fine releases over the years, this one in my estimation ranks in the top 10 percent. If you love great conducting of great music, make this absolutely a priority, must-have acquisition; urgently recommended.
James A. Altena