The present release brings together three concerto recordings by American violinist Isaac Stern, all taken from live performances early in his career, and accompanied by three legendary conductors, none of whom made commercial recordings of these works. While the Haydn concerto has seen limited LP release by the Japanese Stokowski Society, the remaining broadcasts are believed to be published here for the first time.

Isaac Stern was born in Kremenets, Ukraine on 21 July 1920, and moved to San Francisco with his parents when he was 14 months old. His first music lessons were given by his mother; and by the time he was eight, he began to receive formal instruction at the San Francisco Conservatory of Music.

In 1931, he followed such other local rising violin talents such as Yehudi Menuhin and Ruggiero Ricci by studying with former San Francisco Symphony concertmaster, Louis Persinger, and continued at the Conservatory under Persinger’s successor at the orchestra, Naoum Blinder. Stern made his debut with the SFSO under Pierre Monteux at the age of 15 in 1936, but considered his first appearance at Carnegie Hall in 1943 to be the true start of his international career.

Monteux features on the earliest performance presented here, the Mendelssohn Concerto. This was part of a series of hour-long CBS broadcasts of the Philadelphia Orchestra given on Saturday evenings in an empty Academy of Music two hours before the regular concerts were to begin, which explains the lack of applause at the end.

Some difficulties Stern experiences toward the beginning might be chalked up to a change in program. The concert that evening was to feature the Beethoven Concerto; so the Mendelssohn, which was probably substituted on the broadcast in order for other repertoire to be included, may have had little or no rehearsal time. Stern handles a broken string at the start of the first movement cadenza with cool professionalism, taking up the concertmaster’s instrument and going on to conclude the performance with great aplomb.

Early in his career, Stern was a particular champion of the lesser-known Haydn Concerto, recording it for American Columbia in 1947 with himself conducting. For the New York Philharmonic broadcast two years later, he had no less than Leopold Stokowski at the podium. The maestro delivers an unmannered, energetic accompaniment; and the tubercular audience suspends its coughing long enough to applaud Stern’s rapturous reading of the second movement. The cadenzas were written by Stern’s longtime accompanist, Alexander Zakin, who plays the harpsichord continuo here.

The final broadcast features Serge Koussevitkzy at the podium of the Hollywood Bowl a year after he had ceded the Boston Symphony to Charles Munch, and a year before his death. A seasoned expert in the Russian Romantic repertoire in whose milieu he had grown up, Koussevitkzy delivers a solid accompaniment to Stern which culminates in a particularly fiery finale. The conductor himself can be heard saying “Bravo!” to Stern at the end, as the string players of the orchestra tap their bows in enthusiastic approval.

Isaac Stern died of heart failure on September 22, 2001 after an extended stay in a New York City hospital.

Broadcast performance of 13 January 1945 in the Academy of Music, Philadelphia

Broadcast performance of 29 August 1950 in the Hollywood Bowl, Los Angeles 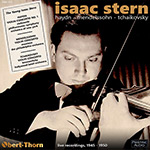