The concert marked Mr. Simila’s American debut as a conductor. He made a deep impression, for clearly he is an experienced and authoritative technician and even more surely he is a man who has this music deeply in his consciousness.  One was struck too, by how skillfully Mr. Simila balanced his orchestral forces, by how well he graded his climaxes so he always had the resources needed for the greatest ones, and by the dark richness of color he evoked from Sibelius’ tonal palette ... Mr. Bjoerling sang with finely sustained, sonorous tones. - R. P., The New York Times, 9 December 1957

This release marks the 60th anniversary of the New York Philharmonic's Sibelius Memorial Concert of 8 December, 1957 - just over two months after the composer's death at the age of 91, on what would have been his 92nd birthday.

The concert began with two anthems, American and Finnish, followed by an address by the Finnish Ambassador to the United States, Johan Nykopp. Thereafter the programme was entirely of music by Sibelius: his Fourth Symphony, five songs performed by Jussi Björling, En Saga and Finlandia. The present recording, which came to me some time back from a collector in the US, was made by Carnegie Hall's in-house recording company. It was not broadcast and has not been issued until now. Online records indicate it was originally preserved on acetate discs, later dubbed onto tape.

The sound quality throughout the recording is in excellent mono. It would appear that Björling had his own microphone - there are some minor microphone handling noises apparent between his songs. I have presented the concert in full, minus the ambassador's speech, and with some trimming of gaps and applause. Sound quality, already very good, is superb in these XR-remastered Ambient Stereo remasters.

"Flagstad's Sibelius recital surely calls for little comment; it is an indispensible record in any Sibelius collection. His contribution to the literature of song is still underrated and pieces like Autumn Evening and On a balcony by the sea, both on this record, are among his finest nature studies. This record sounds as splendid as it did in its SXL form and is recommended with the greatest possible enthusiasm". R.L., The Gramophone, October 1970

The overall duration of the concert proved a little too long for a single CD but would have been unsatisfyingly short for a double CD issue without additional material. Happily this was to hand in the form of a stereo LP in the Pristine collection of fourteen Sibelius songs, recorded by Kirsten Flagstad with the London Symphony Orchestra two months after the memorial concert took place. As is to be expected, Decca did a marvellous job of recording in superb stereo the still wonderful voice of Kirsten Flagstad and the rich sound of the London Symphony. This alone is a treasure worth rediscovering - happily restored here from immaculate vinyl and requiring minimal restoration.

Cover artwork based on a photograph of Sibelius 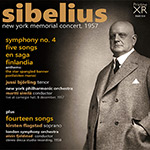 Jean Sibelius died on 20 September 1957, at the age of 91. Easily the best-known Finnish composer, his symphonies and tone poems remain in the mainstream of concert repertoire and extremely popular with audiences.

A few weeks after his death a memorial concert was organised at Carnegie Hall in New York, featuring members of the New York Philharmonic under the baton of Finnish conductor Martti Similä. The date chosen, 8 December, would have been Sibelius’s 92nd birthday. Naturally the programme consisted entirely of works by Sibelius: his fourth symphony, tone poems En Saga and Finlandia, and five songs sung by Swedish tenor Jussi Björling.

Symphony no.4 was premiered in 1911 and has often been interpreted as being full of foreboding for a Europe on the cusp of war. Sibelius himself stated that the work was a ‘protest against present-day music’ in particular the atonal works of composers such as Schoenberg.

En Saga (A fairy tale) was written in 1892, and is not meant to portray a particular story. Sibelius believed that "En Saga is psychologically one of my most profound works. I could almost say that the whole of my youth is contained within it. It is an expression of a state of mind. When I was writing En Saga I went through many things that were upsetting to me. In no other work have I revealed myself as completely as in En Saga.”

Finlandia was written in 1899 and meant to symbolise key moments in Finland’s history, encapsulated in the phrase ‘Finland Awakens.’ Reflecting on the immediate popularity of the piece Sibelius recorded in his diary "What is so attractive about this symphonic poem? Surely it is its 'plein air' style. Really, it is based entirely on themes 'given from above'. Pure inspiration."

Jussi Björling sings the five Sibelius songs in his native Swedish: Säv, säv, susa [Reed, reed, rustle]. Flickan kom ifrån sin älsklings mote [The girl returned from meeting her lover]. Var det en dröm? [Was it a dream?] Svarta rosor [Black Roses]. Demanten på marssnön [The Diamond in the March snow]. Songs 1, 4 and 5 are from Op. 26, songs 2 and 3 from Op.37. Björling regularly performed these Sibelius songs in his concerts, and made commercial recordings of nos.1, 4 and 5. His affinity with the music is absolute, and his extremely beautiful tone captures the essence of these songs perfectly.

Martti Similä was a close friend of Sibelius and was chief conductor of the Helsinki Philharmonic (1945-51) and then the Lahti Symphony (1951-57). After conducting a concert in honour of Sibelius’s 80th birthday Sibelius informed him ‘You have understood my psyche as very few others have.’ He died at the age of 59 shortly after conducting this performance on 9 January 1958.

We have Decca producer John Culshaw to thank for enticing Kirsten Flagstad out of retirement in the late 1950s. After being an RCA Victor artist since 1935, her recording career seemed over when she parted ways with the company in 1954, partly over the leak of information about the ‘assistance’ provided for some high notes in the complete recording of Tristan und Isolde. Culshaw assiduously courted Flagstad, and eventually she agreed to record first lieder and then more substantial pieces, including acts 1 and 3 of Die Walküre. Much of the lieder she recorded was from Scandinavia and the Sibelius album was recorded in stereo in 1958. Despite being over 60 years old, Flagstad’s vocal technique remained absolutely rock solid and her seamless voice was capable of great nobility and tenderness while still being fully capable of soaring over every orchestral climax.

An audience of 2,700 filled Carnegie Hall late yesterday afternoon for the Sibelius memorial concert that was given there under the auspices of the Finlandia Foundation and Unisomi, Inc., an organization fostering the ideals of the United Nations through music.

The concert, which was devoted to Sibelius’ music, was an impressive one, for it included such substantial works as the Fourth Symphony and “En Saga” and it was performed by first-class forces. The orchestra consisted of ninety players from the New York Philharmonic. The conductor was Martti Simila of Finland, who has devoted a lifetime to studying Sibelius. And the soloist for the group of songs with orchestra was Jussi Bjoerling, Swedish tenor of the Metropolitan Opera.

The concert marked Mr. Simila’s American debut as a conductor. He made a deep impression, for clearly he is an experienced and authoritative technician and even more surely he is a man who has this music deeply in his consciousness. Unhurriedly, but always sustaining the right tension, he let the music unfold. As it unfolded, too; it had the right somber intensity and the welling outbursts of melody that are characteristic of the composer.

One was struck too, by how skillfully Mr. Simila balanced his orchestral forces, by how well he graded his climaxes so he always had the resources needed for the greatest ones, and by the dark richness of color he evoked from Sibelius’ tonal palette.

Mr. Bjoerling sang with finely sustained, sonorous tones. He chose Sibelius songs with Swedish texts, “Saev, saev, susa,” “Flickan kom,” “Var det en droem,” and “Svarta rosor.” Because the applause was prolonged he sang as an encore one whose title he translated as “The Diamond Snow in March.” “Finlandia” closed the program.