Fritz Reiner was esteemed as one of the première interpreters of Wagner of his time, both in the opera house and on the concert stage. Yet, his recorded legacy of the Bayreuth master’s works is surprisingly small. Besides the selections in this reissue, Reiner’s only other commercially released Wagner were an RCA Victor SO 45 rpm single coupling the Tannhäuser Fest March with a remake of the Lohengrin Act 3 Prelude, and a lone RCA “Living Stereo” LP with the Chicago Symphony with the same Meistersinger selections presented here along with excerpts from Götterdämmerung. By contrast, RCA allotted Charles Munch, who was not known for his opera conducting, two LPs devoted to Wagner.

Collected on this release are all of Reiner’s commercially-issued 78-era recordings of Wagner. (There was a significant tranche of others which were not released at the time, including EMI’s recordings of Reiner’s 1936/7 Covent Garden performances of a complete Tristan and excerpts from The Flying Dutchman and Parsifal.) The two selections which open our program are Reiner’s first issued recordings, although they were originally published without credit to conductor or orchestra. The World’s Greatest Music series was recorded by RCA Victor for sale by the New York Post newspaper. It featured discs by Ormandy and the Philadelphia Orchestra, Rodzinski and the NBC Symphony and others, all newly recorded exclusively for the series. At the same session, Reiner recorded a Debussy album (reissued on Pristine PASC 438). A reduced orchestra of 78 players was used; but in the ample acoustic of Carnegie Hall, the sound was convincingly large.

The repertoire is significant to Reiner’s career. He conducted Die Meistersinger with Schorr as Sachs during the single season (1934/5) of the Philadelphia Orchestra Opera, reprised it at the Met in the early ‘50s, and performed it yet again during the reopening season of the Vienna State Opera in 1955. As for Parsifal, Reiner was one of several conductors to give the first authorized staged performances of the work outside of Bayreuth on January 1st, 1914, as soon as the Wagner family’s 30-year exclusivity expired.

Reiner began his tenure as music director of the Pittsburgh Symphony Orchestra in the fall of 1938. At their first Columbia session in March of 1940, several Wagner items were recorded; but because of electrical line problems, all except the “Ride of the Valkyries” were scrapped. The remaining items were re-recorded the following year, except for a Tristan Prelude and Liebestod. The sessions of January and November of 1941 would be the last for Reiner’s Wagner in the 78 era, even though he would continue to record with the PSO until 1947.

Columbia’s practice at the time was to record on wide-frequency 33 1/3 rpm lacquer master discs, from which the 78s and (later) LPs would be dubbed. I have used the LPs as the source for the items which appeared in that format (Tracks 3 and 5 – 8) due to their quieter surfaces and wider frequency range. The remaining items, which never appeared on LP, were transferred from original shellac 78 rpm discs.

Cover artwork based on photographs of Reiner & Wagner 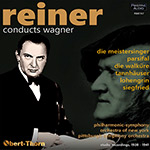