Among the finest of these offerings, however, is the Sibelius Second Symphony—taut, probing, idiomatically on the mark and, lyrically inspired. Very few conductors can match Horenstein’s grasp of Sibelius’s architecture, especially in the problematical finale.
William Zagorski, Issue 28:5 (May/June 2005) of Fanfare Magazine.

There are, however, certain performance traits that were always present with this conductor. One would be a very careful attention to balance, texture, chord voicing, and contrapuntal detail. Horenstein seemed able to perceive music both horizontally and vertically, without giving undue weight to either element. So one always hears all the voices that the composer utilized in a score, but with no excess prominence given to subsidiary lines. Another Horenstein fingerprint is a careful balancing between the lyrical and the rhythmic. The Sibelius Second Symphony is grand, long-lined and, at the same time, richly detailed, and when the music is supposed to sing, as in, for example, the last movement, it sings its heart out—but the rhythmic spine around which the melody is woven is always clear.
Henry Fogel, Issue 28:3 (Jan/Feb 2005) of Fanfare Magazine.

Ivry Gitlis is a technical master, and he brings to both the Bruch and Sibelius concertos an address that stands them in very good stead. But he is comparatively reluctant to woo the music, when this approach seems called for; or it may be that a rather fast and narrow vibrato makes him seem so. To the Bruch, of course, this lack of romantic ardour is the more damaging. The Sibelius relaxes less often; and indeed Gitlis's attack on it is pursued with an intensity and ferocity that are substantially rewarding in their own right. The Vienna Pro Musica orchestra, too, attacks all the music with determination...
M.M., The Gramophone, November 1956

Gitlis's Vox legacy was small but important. The Sibelius is unusually tensile, its opening moments cast in a disorientating haze of white light, its solo line given with fiery abandon (the finale is magnificently argumentative).
R. C., Gramophone, November 1993 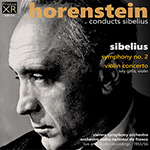