Apart from one or two minor blemishes, Beethoven’s Fourth Symphony was accorded a beautiful performance - fleeting, precise and very expressive. Beethoven is one of the composers whom Mr. Koussevitzky performs with something of a super-super intensity and style. He makes the music “sing” all the way.

In view of such re-creative accomplishment, it is probably an invitation to be mobbed to suggest that the Fourth, no matter how fine its quality, is perhaps the least interesting, comparatively, of all the Beethoven nine symphonies.

This is not said casually; the First and Second are remarkable because of the departure they show from the formalism of the 18th Century; the Third, Fifth and Ninth are vast, dynamic masterpieces, and so, in its light-hearted way, is the Seventh. The “Pastoral” is unique, and the Eighth differs from all its fellows. But the Fourth? Call it one of the valleys rather than one of the peaks of Beethoven's genius.


Producer's Note
The reviewer in the Boston Globe, whilst just a little dismissive of Beethoven's Fourth Symphony, did at least praise the performance he'd heard a day before the present recording was made, thanks to a live radio broadcast from Boston's Symphony Hall. It may at the time have been a trifling matter; Koussevitzky was to conduct the Fourth a total of 39 times with the Boston Symphony Orchestra, and this was its 33rd outing. Yet this recording is unique: the only surviving record of any performance given by Koussevitzky of this work, it has never been released until now.

Although essentially well captured from a radio broadcast and nicely preserved on acetate discs, a number of technical flaws may have kept it from use before now. The most obvious is a chronic pitch drop across each disc of up to a semitone a side, coupled with severe wow and flutter - all almost impossible to remedy until recently. Furthermore, some of the sides were slightly incomplete - a note or two missing at the joins. In all but one case Beethoven offers the remedy in his repeats; in one case a tenth of a second from another recording creates a seamless and undetectable bridge. With these faults remedied the performance can finally be heard in all its "fleeting, precise and very expressive" glory.

The Symphony No. 7 was in much better shape and is one of four Sevenths listed in the Koussevitzky discography. Again a live broadcast performance, this too is, we believe, being issued here for the first time, one of ninety performances given with the Boston orchestra by Koussevitzky. 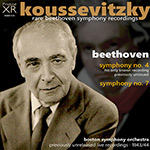