Dutch conductor Paul van Kempen was born in Zoeterwoude , Netherlands in 1893. His studies at the Amsterdam conservatory from 1910 to 1913 included composition and conducting with Julius Roentgen and Bernard Zweers , as well as violin with Louis Zimmerman. From 1913, he was a second violinist with the Concertgebouw Orchestra . A year later, he was in the first violin section. After 1916, he began to make his career more in Germany , and served as concertmaster in orchestras in Posen, Bad Nauheim und Dortmund .

In 1932, Van Kempen became a German citizen. He was music director in Oberhausen for two years. From 1934 to 1942, he was principal conductor of the Dresden Philharmonic . In 1942, he succeeded Herbert von Karajan as Kapellmeister in Aachen, serving through 1944. Several years after World War II , in 1953, Van Kempen became general music director of the city of Bremen.

In 1949, Van Kempen returned to the Netherlands as principal conductor of the Hilversum Radio Philharmonic Orchestra . His activities during World War II , which included conducting concerts for the Wehrmacht , made him a controversial figure in the Netherlands. On one occasion, in 1951, Van Kempen was engaged as a substitute conductor at the Concertgebouw Orchestra in place of the ill Eduard van Beinum . During the first night, audience members protested strongly, but the concert took place. On the second night, the audience disruptions were so severe that 62 musicians left the stage and refused to continue. Van Kempen died in Amsterdam in 1955 at age 62.

The present release brings together all but one of van Kempen’s recordings of Scandinavian works (he also recorded Grieg’s Symphonic Dances) and includes one particular rarity: his Sibelius Seventh Symphony.

Grieg’s Peer Gynt Suites were recorded with van Kempen’s own Dresden Philharmonic, with whom he made many memorable recordings for Grammophon/Polydor from the late 1930s through the early ‘40s (including a Beethoven Fifth reissued on Pristine PASC 327). They were pressed on wartime shellac with a higher-than-usual level of surface noise.

The Sibelius Fifth was one of three recordings van Kempen made with the Concertgebouw Orchestra (the other two being Haydn’s “London” Symphony and Schubert’s Ninth) at a time when Grammophon was spotlighting guest conductors, including Karajan and van Beinum, appearing with Mengelberg’s ensemble for the first time on disc. A postwar yellow-label DGG pressing with relatively quieter surfaces than wartime pressings was located for this transfer.

The Sibelius Seventh was one of three recordings van Kempen made with the Hilversum Radio Philharmonic for Telefunken, which included the Mahler Fourth reissued on Pristine PASC 466. It appeared on a pair of 78s and also as the filler side to a two-LP version of the Bruckner Fourth with the same orchestra. I have transferred it from the LP due to its quieter source material, fixing the awkward side joins on the original LP as well as attempting to smooth out the frequent volume fluctuations on that rather rare release. Clocking in at a little over 16 minutes, it remains one of the fastest – and most exciting – accounts of the work ever committed to disc. 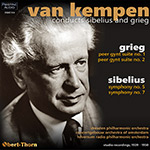