This album brings together two very different recordings made just six weeks apart by two of the twentieth century's finest virtuoso musicians, Jascha Heifetz and Vladimir Horowitz, neither of which was intended for release. The Heifetz was recorded in-house by the Carnegie Hall Recording Company, using the CBS microphones installed for the regular weekly broadcasts of the New York Philharmonic. This Sunday afternoon concert was also broadcast by CBS, but the lack of announcements over the extended applause suggests this was not a CBS recording. Whilst the concerto performances have appeared elsewhere on individual releases, both appeared in less than fine sound, with scratches, crackles and disc surface noise apparent.

This release not only reunites for the first time the two concertos Heifetz performed that night in New York (3 days after the concert reviewed in the New York Times, see review tab), but also deals with the shortcomings heard in those previous releases. Whilst some surface damage to the original acetates is still occasionally apparent, for the most part the sound quality is very good - clear, bright and well-balanced.

Jascha Heifetz was, quite simply, one of the greatest violinists of the twentieth century. Born in Lithuania, then part of Tsarist Russia, in 1901 he trained in St Petersburg and was performing to international acclaim even before the outbreak of war in 1914. In 1917 he fled the Russian Revolution to settle in the USA, making an immediate and sensational impact on the musical scene of what became his adopted home.

Although a revered interpreter of the classical repertoire, Heifetz championed contemporary composers throughout his career. Compatriots such as Prokofiev and Shostakovich benefited from his première performances or recordings of their works for violin, as did Sibelius, Walton and Korngold. Heifetz premiered Korngold’s Violin Concerto with the St Louis Symphony in February 1947, following it up with the broadcast performance heard here with the New York Philharmonic a month later. Olin Downes, critic of the New York Times rather aloofly described the work as ‘a Hollywood concerto’ that despite being ‘fully orchestrated in the Straussian manner’ was somewhat ‘commonplace.’ Heifetz, however, was decidedly in ‘top virtuoso style’ he decided. Heifetz made a commercial recording of the work in 1953 and as a result the violin concerto became one of Korngold’s best-known works.

The Horowitz recording of Mussorgsky's Pictures at an Exhibition was recorded over two sessions at the end of 1947 and issued on RCA the following year. The source recordings here were so superior to the sound heard on RCA's reissue that it was originally assumed to be the lost session of 15 May, 1947.  Close analysis reveals this not to be the case, alas. Nevertheless it's an opportunity to hear this classic recording in much greater clarity than ever before.

Cover artwork based on a photograph of Heifetz & Horowitz 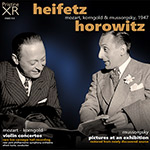 ‘The concert of the New York Philharmonic-Symphony Orchestra, Efrem Kurtz, guest conductor, last night in Carnegie Hall was not replete with excitement or with memorable feats of performance, interpretation or creative originality. This holds true in spite of the fact that Jascha Heifetz played, and the further fact that he gave the first performance in New York of the Concerto for Violin, Op. 35, by Erich Korngold.

This is a Hollywood concerto, with vibra phone effects and like devices; fully orchestrated in the Straussian manner; commonplace in its thoughts; liveliest in the final movement, which Mr. Heifetz played in top virtuoso style. Other pages of the concerto are in more lyrical vein, but the melodies are ordinary and sentimental in character; the facility of the writing is matched by the mediocrity of the ideas.

Mr. Heifetz had his best moments in Mozart, when the transparency and the fine continence of his style matched the classicism of the composer, and in the sparkle he gave to pages of the finale...’

"Jeremy Nicholas For some reason I have always been fiercely defensive about this work and, despite his less than agreeable personality, the violinist who made the first recording of it. There was a time as late as the 1990s when some critics and broadcasters of a certain hue loved to look down their noses at Korngold in general and his Violin Concerto in particular. Why? Because he wrote film music (horror!) and the concerto uses four themes that Korngold had dreamt up originally for the silver screen (beyond the pale!).

How clever they were, these arbiters of musical taste, each time Korngold’s music came up for discussion, to repeat that stale old canard ‘More corn than gold’ coined by critic Irving Kolodin in the New York Sun after the work’s East Coast premiere. But to the case: for me, this recording of Korngold’s Violin Concerto from January 10, 1953, made, appropriately, on Sound Stage 9 at Hollywood’s Republic Studios, has never been surpassed.

Rob Cowan Well, with your last three words you’ve just about rendered my contribution redundant, Jeremy. Anyone who has heard the teenage Korngold’s Sinfonietta, which was keenly promoted by some of the greatest German maestros of the pre-war period (and here I’m talking both world wars), will know that Korngold’s luscious style was well and truly in place a good 20 to 30 years before this – or the film music – was composed. I’ve never understood why critics have hurled verbal detritus at this wonderful music.

I remember years ago talking to the great violinist Louis Kaufman (the eloquent fiddle in classic scores for Gone with the Wind, Wuthering Heights and so on) and he seemed quite defensive about his ‘weepy work’. Heifetz was of a like heart, and everyone after him who has played the Korngold, no matter how competent and ‘silver-toned’, sounds patronising. They take a ‘naughty-but-nice’ approach, guiltily pushing the calories, whereas Heifetz indulges that inimitable, lean but intense bitter-sweetness, that ‘speaking tone’ with its infinitely varied vibrato, toying with our emotions like some hot-breathed Lolita. He’s ‘the bizz’ as they say. Korngold, like Steiner and Waxman, knew the sort of fiddle sound he wanted (Kaufman, Seidel and Slatkin provided it), so there can’t be any doubt that Heifetz is ‘authentic’.

JN Absolutely, though of course Heifetz wasn’t in the picture (if you’ll pardon the pun) when Korngold began writing the concerto. Bronislav Huberman, a violinist of a very different type and temperament, provided the initial impetus, and the first two movements were written with him in mind. Also, Bronislav Gimpel claimed to have played the work before Heifetz (though this must have been in private and before it was complete, as Heifetz definitely had some influence on the technically demanding finale). The sound world of the whole score seems so empathetic with Heifetz’s, I wonder if Korngold revisited what he had previously written once Heifetz was on board?

It’s quite an exotic line-up for a violin concerto: apart from the inclusion of a bass clarinet, contrabassoon and celesta, there’s a glockenspiel, xylophone, vibraphone, tubular bells, gong and bass drum. And here’s the thing: though you’d be hard pressed to hear all these individually on this recording, does it matter?

RC I know, of course, that Heifetz wasn’t ‘in the picture’, it’s just that when it came to prompting a lump in the throat for the movies, his style was prototypical. Virtually every movie concertmaster followed his stylistic lead. It’s worth noting too that there’s a concert recording by Heifetz under Efrem Kurtz from March 1947 (out on Music & Arts), a performance given just six weeks after the premiere in February with Vladimir Golschmann in St Louis. Interesting that the balance there is rather more natural than it is on this famous version under Wallenstein – and the performance itself is, if anything, even more exciting.

You allude to the exotic scoring but for those of us brought up on that wonderful old vinyl album Heifetz’s all-pervading presence sidelined the orchestra’s contribution to a mere ‘accompaniment’ (as was quite often the case with Heifetz’s orchestral records). Later recordings by the likes of Shaham, Mutter, Perlman, Schmid, Znaider and Juillet – all exceedingly fine players – admit more in the way of subsidiary orchestral detail (Shaham and Previn being perhaps the most revealing in that respect). They all act as essential supplements to this classic. I suppose the most overwhelming aspect of Heifetz’s performance – whether under Wallenstein or under Kurtz – is the intensity of those leaps into the instrument’s upper regions, and the accuracy of his intonation. It’s fearless playing..."