Along with Mozart, Beethoven and Mahler, Brahms was one of the cornerstones of Bruno Walter’s repertoire. Yet it was not until 1934, twelve years into his recording career, that Walter made his first Brahms discs. The Fourth Symphony was recorded when Walter was guest conducting in London, in a long session that also included Beethoven’s Fidelio Overture and Mozart’s Symphony No. 39. Two years would pass before Walter would record his next Brahms, the Third Symphony, this time with “his” Vienna Philharmonic. The following year would see the recording of both the First Symphony and the Academic Festival Overture, again in Vienna.

It is likely that Walter would have gone on to record the Second in Vienna in 1938, had it not been for Hitler’s Anschluss, which drove him out of Austria and into France, where he took up residence. Although he continued to record for EMI in both Paris and London before the outbreak of the War, the company did not take the opportunity to complete his Brahms cycle. By the time he moved to America and began conducting the New York Philharmonic regularly, their label, American Columbia, had already recorded a Brahms Second in 1940 under their music director, John Barbirolli, and were to record another with his successor, Artur Rodzinski, in 1946. It would not be until 1953 that Walter finally got to record the Second as part of a complete Brahms symphony cycle on LP.

The present release brings together Walter’s three pre-war commercial recordings and completes the cycle with his earliest extant broadcast of the Second. The Walter we hear in these performances is not the avuncular, Gemütlich elder statesman one associates with his final stereo recordings. This Walter is volatile, even volcanic. One hears the fiery conclusion of his Brahms Second with the NBC, and assumes the high intensity is due to working with Toscanini’s orchestra; but then one hears the Third from Vienna or the Fourth from London, and it is the same story. Only in the First does he seem more subdued, even compared to his later self.

A word about the original recordings is in order. It is interesting to note that the Third Symphony has Columbia matrix prefixes at a time when EMI artists like Walter and Beecham were recording simultaneously for both that label and HMV, with some recordings being issued on both imprints in different parts of the world. Both this and the First Symphony have been pitched at A=445 Hz in accordance with the tuning that the Vienna Philharmonic was reported to have used at the time. (The British and American recordings have been pitched at the “standard” A=440 Hz.)

In the Fourth Symphony, each movement was recorded continuously with overlapped fade-downs at the ends of sides and fade-ups at the beginnings of the following sides, in the same manner that RCA was recording Stokowski and the Philadelphia Orchestra at the time. For the broadcast of the Second Symphony, I have added a small amount of digital reverberation to counter the excessively dry acoustics of Studio 8-H, whose lack of resonance seemed to me to draw attention to itself and away from the performance.

P.S. I am also including a bonus audio file for Walter's Academic Festival Overture.  I had hoped to include this in the set, but it ran just a little too long for the first CD.  It's just too good a performance (and recording) to leave behind, and it completes Walter's pre-war Brahms recordings.

Producer and Audio Restoration Engineer: Mark Obert-Thorn
Cover artwork based on a photograph of Bruno Walter 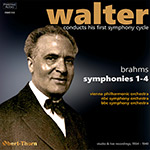 This release is indispensable; urgently recommended

While Bruno Walter’s historic studio recordings of three Brahms symphonies have not lacked for past reissues, to my knowledge on only one previous occasion were they assembled into a single set, and that was on a set of Bruno Walter Society LPs, where the slot for Symphony No. 2 was filled instead by a 1955 broadcast performance with a French orchestra (released on CD by the now regrettably defunct Tahra label). Doubtless this was due to not having all four symphonies in studio recordings to make a handsomely filled two-CD set, unlike with Felix Weingartner, whose traversal was completed before the disastrous outbreak of World War II. Also unlike Weingartner, Walter lived into an era where he did make two subsequent complete cycles for LP, in mono with the New York Philharmonic and in stereo with the Columbia Symphony. Instead, Nos. 1 and 3, and 3 and 4, though not 1 and 4, have variously been paired together in issues on the Koch, Opus Kura, and EMI Japan labels, with each symphony also enjoying individual releases paired with works by other composers. Consequently, this release fills a real gap in the catalog of historic reissues—especially since for the Symphony No. 2 it includes a scarce broadcast performance that is contemporaneous with the three studio recordings and which has previously surfaced only on two ultra-rare and long out of print Japanese labels, Eklipse and Serenade. While sonically the studio recordings have been well served by previous issues—most recently the Symphonies Nos. 1 and 3 on the Opus Kura release that I just reviewed in 41:1—remastering wizard Mark Obert-Thorn has once again managed to surpass past competition (including his own previous remastering for Koch of Nos. 3 and 4) and elicit that extra degree of clarity, warmth, and instrumental color with a corresponding slight lessening of background surface noise.

While both sonically and interpretively my first choice for a Brahms symphony cycle by Walter would be either the 1951–53 studio cycle or the live 1951 cycle also released by Pristine Audio (see my review in 40:6 and 2017 Want List), these performances are also real treasures. While not having quite the febrile tension of the New York versions, the Vienna Philharmonic recordings of Nos. 1 and 3 from 1936 and 1937 (the latter having significantly quieter surfaces) have the splendid glow of that orchestra’s distinctive orchestral palette, with shimmering strings, tangy woodwinds, and rich but never blaring brass. And, of course, there is the equally unique sense of Gemütlichkeit throughout the proceedings, with unbuttoned lyricism and endearingly characterful but never arch portamento, rubato, and Luftpausen, while the ever-tricky cascading string figurations in the finale of No. 3 have never sounded so effortless and natural. Listening to the wonderful sense of relaxed enjoyment throughout these proceedings, it still seems unfathomable that, only months after the Symphony No. 1 was recorded, Vienna would be engulfed in the Nazi maelstrom.

For its part, the Symphony No. 4 was set down earlier, in 1934 with the BBC Symphony, then only four years old and enjoying its dynamic first phase under Adrian Boult, with whom Walter enjoyed warm relations. If the first movement is a bit rhythmically stiff in the alternating two-note dipping and rising string figures, the playing is always secure and well balanced, and blossoms in the following Andante moderato, with lovely clarinets though a slightly squawky oboe. The Scherzo is rendered with energetic bustle, and if the finale lacks the degree of weighty implacability which Furtwängler could bring to bear it is still effective in its own right.

The NBC Symphony performance of the Symphony No. 2 was part of two series of guest engagements that Walter had with the orchestra during 1939 and 1940. (He would conduct it again in 1951, and once in 1957 as the “Symphony of the Air” for the concert memorializing Toscanini upon his death.) While there is no doubt that this is Toscanini’s orchestra in terms of its razor-sharp discipline of instrumental attack and the less warm, more astringent, treble-oriented sound (magnified of course by the notorious Studio 8H acoustics), Walter nevertheless succeeds in imprinting his own interpretive stamp on the proceedings in the singing line. As is so often the case, a pre-1957 recording by Walter puts paid to the notion held by some familiar with only his final stereo recordings of a conductor given to relaxed, leisurely performances. Here there is surging forward momentum and vibrant, arresting tension as well as ardent songfulness, and as always a totally masterful command of the composer’s idiom. Obert-Thorn has not only obtained superior sound from his original sources here, but also imparted some degree of natural-sounding warmth to the proceedings as well that is a pleasure to hear.

As a bonus, a free download is available to purchasers of this set of Walter’s 1937 recording of the Academic Festival Overture with the Vienna Philharmonic, a classic account made in conjunction with the Third Symphony. It’s too bad that the time limit of 79:57 for producing CD-Rs prevented that from being squeezed onto one of the discs with a resulting total timing of about 81 minutes, but that’s the way the megabytes crumble. For collectors of historic recordings, this release is indispensable; urgently recommended, and an early candidate for the 2018 Want List. James A. Altena