With these two Vox studio recordings with the Vienna Symphony Orchestra (recording under the pseudonym "Pro Musica") we reach the final recording of Horenstein's mono era - the 1958 Pastoral being late for mono in anyone's book, at a time when Horenstein had already made a number of stereo recordings. Not only were they mono, but to be honest they sounded pretty awful, with thin, scratchy strings and a bitter, harsh sound that in itself was quite off-putting. This new XR-remastered release aims to change that, and will almost certainly have the critics completely re-evaluating these performances. For the rest of us we finally get to hear Horenstein's Beethoven 5 and 6 as they were intended, quite possibly for the first time. 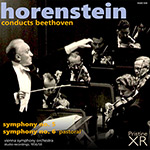 ​In Beethoven, Horenstein is disinclined to take chances, staying mostly in the quasi-classical mode of Bruno Walter: he takes the opening motto of Beethoven's Symphony No. 5 at the same tempo as what follows, with no Furtwänglerian lingering. Unlike Walter, however, Horenstein doesn't project a great sense of purpose behind this approach; it's as though, in the face of this symphony's great performance tradition, he just wasn't going to stick his neck out.

Though geniality was hardly one of Horenstein's more prominent attributes, Beethoven's Symphony No. 6 is full of it in a performance that makes more sense the more one listens. The less-than-glossy sound of the Vienna Pro Musica has a rustic quality that suits the music's character - and the brisk gait Horenstein gives to it. Should we be surprised that this sounds almost as lean and tight as a Roger Norrington performance? (Horenstein, after all, was the first to record the Brandenburg Concertos with original instruments.) The placid and pastoral sections in Beethoven's nature study never take on the idealized stylization one hears in more high-toned performances; the weight Horenstein gives to the harmonic transition between the fourth-movement storm and fifth-movement prayer of thanksgiving in the lower instruments conveys the steep toll the storm has taken on this tender land. Furthermore, while the final movement can seem cloyingly inspirational, Horenstein keeps it sounding genuine with the unusual sense of definition and purpose he gives to the pirouetting rhythms. Throughout, there's a distinctively serpentine sense of legato, the likes of which haven't been heard since that eccentric 1920s Oskar Fried recording of Beethoven's Symphony No. 9. The difference with Horenstein is that it works.

Jascha Horenstein's Vienna reading of the Fifth Symphony was issued in 1957, (Vox PL 10030) and seems to have attracted very little attention. This performance is not quite what one might have expected from a conductor who, in Brahms for instance, could out-italicize even a Furtwaengler. What impresses is not any great dramatic moment, but the flowing cohesiveness, the incessant movement of the whole. The Vienna "Pro Musica" sounds trim and poised, with every instrumental gesture such as the striding horns in the third movement, or the clucking bassoons in the transition to the Finale, neatly in place. No quadruple woodwind or overblown brasses mar the balance of the whole. We are possibly so accustomed to conductors who storm the heavens in this score that a classically proportioned conception is simply lost in the shuffle. One could hardly accuse Horenstein of underplaying any single element; moments such as the oboe mini-cadenza in the first movement, the scampering basses in the Scherzo, and the transition to Presto near the end of the Finale are all given their due, and the conductor's rhythmic control is superb.

The rounded Viennese tone may work against the urgency of Horenstein's approach; this performance would have more sheer impact on CD as opposed to a single LP side, where tonal weight was inevitably lost. In any case, it was entirely characteristic of this conductor to eschew a conventional approach to a thrice-familiar work.

Horenstein seems to me an unpredictable conductor. To some music he brings such zest that he compels attention and interest ; modern music for the most part. But in the classics he can vary between the very good and the utterly pedestrian. The "Pastoral" Symphony finds him trying to get by on sheer vigour. In the first movement particularly, you can sense him whipping his players along with a positive surfeit of energy, so that at times they have to hurry to keep up with him. There is no binding rhythm. He does in fact finish this movement much faster than he began it. He plays the slow movement "in twelve ", which makes it dull ; Klemperer, taking it rather slower, nevertheless makes it flow more by lightening the second and third quavers in each group. Horenstein is at his excellent best in the scherzo and "Storm ", but in the finale he gives the sort of stodgy performance that one hears all too often. This is an extremely difficult movement to bring off, and in my experience only Toscanini, Furtwangler and Klemperer have really managed it. The Consecration of the House overture is loud for too long, lacks climax, and sounds more of a bore than it should. The record contains a generous amount of music for the money, and in some ways it is quite well recorded. But a microphone overnear the bassoons constantly irritates. In the scherzo they sound like hens clucking in your ear, and this is not wholly unlikable, but elsewhere the internal balance is quite spoilt.