This is the third of three volumes dedicated to the two concerts given on 25 October and 8 November 1959 by Sir Thomas Beecham and his Royal Philharmonic Orchestra at London's Royal Festival Hall and captured in excellent mono by the BBC Transcription Service. Whilst these recordings preserved the main body of both concerts, it would appear that only the encores from the second concert have survived, which alas deprives us of the opportunity to hear Beecham's Delius one more time. Whilst some of these recordings have been previously issued on the BBC Legends label, the sound quality heard on the present releases is considerably improved thanks in no small part to XR remastering. Here the orchestral timbre is much more realistic, the hard, harsh edges of the original recordings have been softened, and a rich body of sound restored. Our series also includes recordings never previously issued. I have elected to remove the announcements dubbed on by the BBC for later rebroadcast. The length of both concerts has required a certain amount of juggling in order to fit three single-CD volumes. 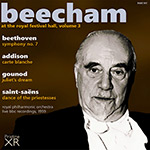 On successive evenings in the Festival Hall two great old men of music have conducted Beethoven— Sir Thomas Beecham and Klemperer, whose aggregate age is more than a hundred and fifty years. Klemperer, owing to recent illness, was obliged to conduct seated, but Sir Thomas, though shaky on foot, stood up, and the energy of his shoulders and arms was as athletic as ever. At a sforzando he tore his arms, at a piano he crouched down, bending over to soften the tone. At the crescendo he raised himself by degrees until, at the forte, he sprang up to his full height; and, as though without knowing it, would often at the same time shout aloud.

This, you might say, is a pretty good description of Sir Thomas in action. As a matter of fact it is a pen-picture by Spohr of Beethoven himself, conducting his seventh symphony. Possibly, then, Beethoven would have joined in the audience’s stentorian applause after Sir Thomas had put over the same seventh symphony, played by the Royal Philharmonic Orchestra. Wagner described the symphony as the “apotheosis of rhythm,” which would have been a very un-Wagnerian understatement applied to Sir Thomas’s performance. He took Beethoven out on the spree, on the Bummel, at any rate, as far as the outer movements were concerned.

I admired especially the dexterity of the Royal Philharmonic Orchestra which enabled it to cope with the notes at the pace set by Sir Thomas, who was at his most galvanic, unbuttoned, reckless, and ebullient.