This is the second of three volumes dedicated to the two concerts given on 25 October and 8 November 1959 by Sir Thomas Beecham and his Royal Philharmonic Orchestra at London's Royal Festival Hall and captured in excellent mono by the BBC Transcription Service. Whilst these recordings preserved the main body of both concerts, it would appear that only the encores from the second concert have survived, which alas deprives us of the opportunity to hear Beecham's Delius one more time. Whilst some of these recordings have been previously issued on the BBC Legends label, the sound quality heard on the present releases is considerably improved thanks in no small part to XR remastering. Here the orchestral timbre is much more realistic, the hard, harsh edges of the original recordings have been softened, and a rich body of sound restored. Our series also includes recordings never previously issued. I have elected to remove the announcements dubbed on by the BBC for later rebroadcast. The length of both concerts has required a certain amount of juggling in order to fit three single-CD volumes. 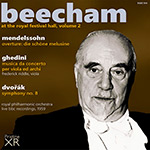