This collection brings together three rarities in the Milstein discography. The Lalo with Ormandy has remained unreissued (at least officially) since the 78 rpm era. As with many older violinists (Heifetz, Huberman), Milstein plays the four-movement version, omitting the Intermezzo.

The Mendelssohn fragments document the only recorded collaboration between Milstein and Toscanini. It was performed during one of the Maestro’s last concerts as music director of the New York Philharmonic. Toscanini’s breakneck tempo in the finale shows that his later broadcast with Heifetz (on Pristine PASC 278) was not an interpretive anomaly.

The Dvořák is a double rarity in that it is not only the sole recording of a Milstein performance with Stokowski, but it is also previously unissued. Additionally, it expands Stokowski’s slim discography of that composer’s works beyond the “New World” Symphony, the Serenade for Strings and a single Slavonic Dance. The conductor’s inimitable voice can be heard saying “Bravo” at the end of the performance.

Recorded during the performance of 29 March 1936 in Carnegie Hall, New York

Recorded during the performance of 26 October 1947 at Carnegie Hall, New York

Cover artwork based on a photograph of Nathan Milstein 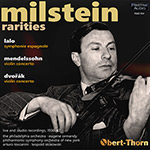 Nathan Milstein (1904 –1992) was a Ukranian-born American virtuoso violinist. Widely considered one of the finest violinists of the 20th century, Milstein was known for his interpretations of Bach's solo violin works and for works from the Romantic period. He was also known for his long career: he performed at a high level into his mid-80s, retiring only after suffering a broken hand.

Milstein was born in Odessa, then part of the Russian Empire , the fourth child of seven, to a middle-class Jewish family with virtually no musical background. It was a concert by the 11-year-old Jascha Heifetz that inspired his parents to make a violinist out of Milstein. He started violin studies with the eminent pedagogue Pyotr Stolyarsky , also the teacher of David Oistrakh . When Milstein was 11, Leopold Auer invited him to become one of his students at the St. Petersburg Conservatory . Milstein may in fact have been the last of the great Russian violinists to have had personal contact with Auer. He also studied with Eugène Ysaÿe in Belgium.

Milstein met Vladimir Horowitz in 1921 when he played a recital in Kiev. Milstein and Horowitz performed together throughout the Soviet Union and struck up a lifelong friendship. In 1925, they went on a concert tour of Western Europe together. Milstein made his American debut in 1929 with Leopold Stokowski and the Philadelphia Orchestra . He eventually settled in New York and became an American citizen. He toured repeatedly throughout Europe, maintaining residences in London and Paris.

A transcriber and composer, Milstein arranged many works for violin and wrote his own cadenzas for many concertos. He was obsessed with articulating each note perfectly and would often spend long periods of time working out fingerings which would make passages sound more articulated.

A recital he gave in Stockholm in July 1986 proved to be his final performance. It was recorded in its entirety, and shows the remarkable condition of his technique at age 82. A fall shortly afterwards in which he severely broke his left hand ended his career. He died of a heart attack in London on December 21, 1992, 23 days before his 89th birthday.