Toscanini conducted two concerts in the 1942-43 season with NBC of American Music, a subject he rarely covered in his
regular programming. We issued the first of these as Volume 1 in this short series (PASC 495); the present volume consists of
the complete concert of 7 February 1943, the second of those two patriotically-inspired wartime broadcasts.

The opening work couldn't perhaps be more badly titled for possible programming in the 21st century than Henry F. Gilbert's
1910 composition Comedy Overture on Negro Themes. Wikipedia informs that "The piece derives its main melodic material
from three black folk songs. The first is from the Bahamas, while the second (''I'se Gwine to Alabamy", a Mississippi
roustabout song) and third ("Old Ship of Zion", used as the subject of a fugue) are American." Of the four works that
constituted this concert it is the only one that has previously seen no issue. Although he had conducted it previously with at
least one other orchestra this is probably the only extant recording of Toscanini performing this work.

It is also the only recording here which suffered much from any notable surface noise - and then only lightly and during the
opening bars. These are some of the finest acetate disc recordings I've ever heard from this era. I had been pleasantly
surprised by the sound of the previous American Music concert, but this second concert sees a step change in sonic quality. If
only all recorded Toscanini broadcasts of this era had been so well preserved!

The major work here is of course the Grofé, with the composer present. Just 12 years after its première, the Grand Canyon
Suite was in 1943 still a popular new(ish) work, a popularity which has perhaps waned over the years, and the audience
responds with great enthusiasm, applauding each of the five movements in turn. This was the first of three outings for the
piece under Toscanini's baton with the NBC orchestra, the other two coming in September 1945. It is interesting to compare
the 1943 and 1945 recordings, which display subtle differences in performing styles, but also significant differences in sound
quality - here the earlier recording on the present volume wins quite comfortably (certainly over the official RCA CD), with
much greater frequency and dynamic range and a far more natural, open sound. Definitely this is the one to have. 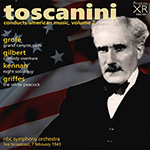 Toscanini’s two broadcast performances of this work are essentially identical to his studio recording. The seriousness with which he approached it is suggested by William Carboni’s recollection of one of the rehearsals:

[Toscanini] kept asking Grofé if the tempo was right . . . ; after all, Grofé was the composer and the Old Man always felt the composer was much more important than the conductor. Every time he asked Grofé anything, he always called him “Maestro”; and Grofé was just in heaven. When it was all over, the Old Man called him up to the podium to ask him if everything was all right, and Grofé said yes and was so overcome as he backed away that he backed into the chairs and fell over them.