While the first volume in this series (PASC 452) focused on Bruno Walter’s American years, here we turn the clock back to his pre-war European recordings. Like that earlier release, the emphasis is on presenting items which have had scant, if any, CD availability. Many of the selections here have been reissued in Japan and some in France, in releases that have had spotty availability elsewhere. One performance is published here for the first time.

The Roman Carnival Overture, one of Walter’s earliest recordings, was inadvertently omitted from Pristine’s two volumes of his acoustic Polydors (PASC 142 and PASC 342), and presents a work to which he would not subsequently return in the studio. The Parsifal excerpt comes from a mere two years later; yet, the difference between the old acoustic process and the new electrical technology makes it seem like an eon has passed.

The Siegfried Idyll dates from the following year, and again the sonic comparisons between this and the acoustic version Walter made two years earlier with the same ensemble (on PASC 482) are striking. By this time, Columbia was apparently imposing a four-minute limit to its twelve-inch sides; and the same work which took up four sides in 1924 now had to be spread over five. Perhaps because of this – or because of the obtrusive swish which plagues the end of the first side – the recording was never issued outside the USA. Oddly, despite the additional room to spread out, the recording is notably faster than the four-sided acoustic version (17:03 vs. 17:35, not including post-track spaces).

The next selection is a souvenir of a highly successful Mozart opera festival that Walter led in Paris in June, 1928. Several recordings were made with the “Mozart Festival Orchestra” (which was in fact the Paris Conservatoire ensemble, perhaps renamed for contractual reasons), but only two were released: the overture to Die Zauberflöte and, oddly, Schumann’s Fourth Symphony. Two other overtures were recorded, probably intended to be coupled on a single disc: Die Entführung aus dem Serail and Le Nozze di Figaro. While no trace has turned up of the former, the latter has survived on a unique shellac test pressing, which was used for the present transfer. It makes its first appearance here.

Eine Kleine Nachtmusik was one of a series of recordings Walter made with the British Symphony Orchestra, an ensemble created by returning veterans of the Great War. I’ve always had a particular affection for this version, both because of the quirky Luftpause Walter introduces after the opening phrase and its repeats (an affectation he dropped in later recordings), and because of the gusto with which the players attack the closing measures of the finale.

By the spring of 1938, Walter had settled in Paris after escaping Vienna during the Anschluss. He made a series of recordings there with the Conservatoire Orchestra, including the Handel and Weber works which close our program. The Handel is noteworthy in its inclusion of a harpsichord continuo, something not yet the norm at that time. Walter had previously recorded the Weber overture acoustically, spread over three sides (on PASC 482). Perhaps due to the time limits of the two sides he was now allotted, the remake is nearly a minute and a half faster, and gains in breathtaking excitement.


Producer and Audio Restoration Engineer: Mark Obert-Thorn
Special thanks to Richard A. Kaplan and David Schmutz for providing source material 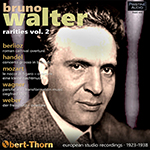 Enthusiastically recommended to all fellow Walterians

Historic reissue labels such as Pristine Audio often issue certain releases solely as a labor of love or for singular documentary value, knowing that their efforts will often be rewarded with but a handful of sales. But one must especially admire Andrew Rose and Mark Obert-Thorn for going ahead with this release, which despite its merits may not even break into double digits for purchases of it. The contents are a true odds-and-ends miscellany of performances by Bruno Walter, with the mix containing two items of particular importance.

The first of these is the 1923 recording of Berlioz’s Le carnaval romain Overture, which was overlooked when Pristine previously issued three CDs of Walter’s acoustics. Within the severe sonic limitations of its vintage it is a fine performance, and reminds one of just what an insightful conductor of Berlioz Walter was. Beyond that, however, this release marks a historic milestone; excepting a possible separate acoustic recording of the scherzo from Tchaikovsky’s “Pathétique” (it is generally presumed, but not certain, that it was recycled into the complete recording of the symphony that Walter made shortly thereafter), every officially released studio recording made by Walter has now been issued on CD. Ideally, I might wish that Pristine would have reissued one of the first two discs in this series with this overture added in—there would be space for it on either one—but given that except for Pristine’s doughtiness several of Walter’s acoustics would not be available on CD, I’m not looking a gift horse in the mouth.

The other especially noteworthy item is the first-ever release of a recording of the overture to Mozart’s Le nozze di Figaro that Walter made in Paris (with the Paris Conservatory Orchestra under a nom de plume) in 1928. It originally was to have been a filler to what was planned as seven sides for a recording of Schumann’s Symphony No. 4, but when that took up eight sides on its own instead, plans to issue the overture were scrapped. This one pressing is known to have survived, and a personal background story goes with it. Over 30 years ago, it popped up for sale in the hands of the well-known British record dealer Raymond Glaspole, with whom I was briefly in contact at that juncture. The asking price for such a rarity was far beyond my means then, as a typical financially hand-to-mouth graduate student. I wrote him to ask if by any chance he could run off a cassette copy of the disc for me before selling it, and he most kindly did so. I’ve had that cassette in my private collection ever since, hoping that at some point its contents might see the light of day more generally, and lo and behold the disc itself has now resurfaced to that end. I have never forgotten that exceptional gesture of gracious generosity. I see that Mr. Glaspole is still alive and active, with his own website; I hope that this review will come to his attention, so that he can once again accept my expression of deep appreciation.

The remaining contents of this release were chosen simply because they are among Walter’s more scarce recordings in terms of circulation, both on 78s and CDs. In his accompanying notes to this release, Obert-Thorn expresses “a particular affection” for this, the first of Walter’s four studio recordings of the Mozart Serenade (three live performances are also extant). I do not share that inclination, and rank this rendition far below the conductor’s 1936 Vienna remake and the live accounts from Stockholm (1950) and San Francisco (1954). In my review back in 40:3 of Pristine’s release of Walter’s complete acoustics for Columbia, I provided a list of his 13 surviving performances of Wagner’s Siegfried Idyll (more than for any other work in his repertoire), six studio and seven live. There, based on my EMI Japan issue, I gave the timing for this 1926 rendition as 17:34; in Obert-Thorn’s remastering here it is only 17:03. As I trust Obert-Thorn’s work implicitly I’m confident he and not EMI Japan is correct; even so, it still ranks among the slowest of the conductor’s traversals of the score, especially relaxed and sunny. While it is not about to displace the 1953 New York Philharmonic studio account as the finest version by Walter (or by anyone ever, for that matter), it is very much worth having in its own right. The 1925 act I Transformation Scene from Parsifal was originally a filler side to the act I Prelude; Walter rerecorded all four sides just two years later, along with an orchestral arrangement of Klingsor’s Magic Garden and the Flower Maidens’ Music from act II. Why remains a mystery to me, as the sound is not appreciably better, and the earlier interpretation is to my mind superior; but the latter set immediately displaced the earlier one. Since the 1925 recording of the Prelude was issued on CD by VAI (albeit almost 20 years ago), Rose and Obert-Thorn elected to include only this filler side here and save the extra space for a different Walter rarity.

Walter did keep a handful of Baroque pieces in his active repertoire: Corelli’s “Christmas” Concerto (recorded in the studio in 1938, with three live performances also surviving from 1939, 1947, and 1948), Handel’s Concerto grosso op. 6/6 (preserved in a 1940 NBC Symphony broadcast), and the 1938 studio version of the Concerto grosso, op. 6/12, presented here. Interpretively it is a forward looking account for its time, with lively tempos and, remarkably, use of harpsichord continuo (most likely but not certainly played by Walter himself). The disc closes with Walter’s 1938 Paris remake of the Overture to Weber’s Der Freischütz, of which he originally made an acoustic recording in London early in 1925 (a live 1950 performance with the Los Angeles Standard Symphony also survives). Whereas the earlier London account is spread over three sides and requires a fairly typical 10-plus minutes to traverse, this rendition was issued on only two sides and comes in at a hell-for-leather 8:51. The orchestral playing is somewhat scrappy, but it’s an exciting if wild ride.

As always, Obert-Thorn’s transfers are exemplary. While this disc will by its nature only interest the most avid Walter enthusiasts, I hope that there are a sufficient number of those reading these pages who will order a copy and make this venture unexpectedly worthwhile financially for proprietor Rose. Enthusiastically recommended to all fellow Walterians.