For this third and final volume in Pristine’s series devoted to the music of Harl McDonald, we turn primarily to live performances of works which were never recorded commercially. His hauntingly melodic Violin Concerto, which had its première the day before the broadcast heard here, shows the influences of several late Romantic composers (Elgar, Sibelius and Rachmaninov among them). The soloist is the Philadelphia Orchestra’s concertmaster, Alexander Hilsberg.

The next selection offers an opportunity to hear a McDonald work in progress. Before he included the “Elegy and Battle Hymn” in his symphonic suite My Country at War (reissued on Pristine PASC 430), it was a stand-alone work with a baritone soloist. The text (“Tall youth, with all of life and living stretched before you/Destroyed, destroyed by treachery”) was based on an essay by Edward Gilson, and deals with the surprise attack on America by the Japanese at Pearl Harbor and the promise of retribution to come. The broadcast heard here was the world première performance conducted by Fabien Sevitzky, who had previously introduced the “1941” movement of My Country.

The next work suggests an unexpected connection. A cycle of sorrowful songs based on the works of a Chinese poet, translated in the composer’s vernacular – could his Third Symphony be Harl McDonald’s Das Lied von der Erde? Unlike the Mahler work, however, there is no pentatonic Chinoiserie here; McDonald was not out to stress the cultural origins of his text. “My object,” he wrote in a program note for the work’s première, “was to uncover in the poems four phases of tragedy that were unlimited by racial conventions or literary styles and to concentrate on the subject matter which seemed universal.” Leopold Stokowski introduced the piece with the Philadelphia Orchestra in January, 1936, and the Ormandy performance heard here was given the year after McDonald’s death as a tribute by the orchestra to its longtime former manager.

While Mahler may not have been the antecedent for the Third Symphony, Copland was the likely inspiration for the final work on our program, the only studio recording here, and the last one made by the composer. The cantata Builders of America expands on the model of Lincoln Portrait by adding a chorus and focusing on two Presidents. The sung text was based on a poem by Edward Shenton, expanded to include a narration authoritatively declaimed here by actor Claude Rains. The recording was made less than a week after the work’s première during a session otherwise devoted to the Philadelphia Orchestra, and the “Columbia Chamber Orchestra” may well include members of that ensemble. (The solo flautist certainly seems to have William Kincaid’s trademark vibrato.) With the exception of two additional recordings of works which had previously been set down on disc (a 1953 taping of From Childhood conducted by Felix Slatkin, and a 1996 version of “Fiesta” from San Juan Capistrano with Keith Lockhart and the Boston Pops), Builders of America would bring to a close the discography of the works of Harl McDonald. 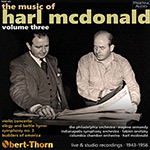