Constantin Silvestri was best remembered for his work in England, most specifically the Bournemouth Symphony Orchestra, a fine ensemble with which he made a number of recordings. Here we find him with what was at the time one of the greatest orchestras in the world: The Philadelphia Orchestra. This superb stereo recording captures his only broadcast with the orchestra and may therefore be the only recording of him in Philadelphia. Culled from perfectly preserved master tapes, it follows previous Pristine releases featuring the orchestra in this era under the batons of Stokowski and Klemperer in offering the outstanding playing of the Philadelphia in stunning performances - most particularly of the Manfred Symphony - recorded in superb high quality stereo sound and requiring minimal intervention from the restorer to present the present programme with superlative sonics.


Recorded live in the Academy of Music, Philadelphia on November 25, 1961 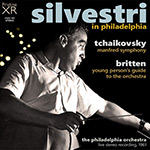 He makes an extremely strong case for the symphony's musical rhetoric