This series continues here with what survives of Bruno Walter's fabulous 1951 series of Brahms concerts with the New York Philharmonic, together with a later live performance of the Violin Concerto which fills the gap in the 1951 recordings left by the apparent loss of a performance with Zino Francescatti. 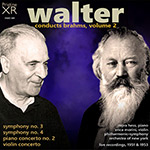