Mackerras and the Polish Radio SO at Edinburgh 1962: Music from beyond the Iron Curtain

Although this stereo concert recording, complete with full announcements, was made by the BBC at the Edinburgh Festival of 1962, it was never broadcast in the United Kingdom. Instead it would appear that it was one of a handful of recordings which were instead pressed onto vinyl and sent to radio station(s) in United States for broadcast there. It is not clear how many copies of each disc were made, nor to where they were sent - or indeed how they were financed. What we do know is that the three discs which made up this broadcast were clearly marked "expires 3.9.66" and probably should have been destroyed after use. Happily they fell instead into the hands of a collector who was able to preserve them for posterity and, finally now, release. 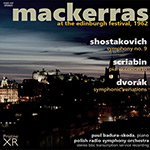 ORCHESTRAL concerts at the festival continue to give us music which is variable in substance and quality. The programme of the Polish Radio Orchestra's second concert contained the piano concerto in F sharp minor of Scriabin, an almost unheard of composer in most parts of the musical world nowadays. This is a young man’s composition dating from 1897; and a prize might be awarded to any critic who, discussing and describing it, is able to avoid mention of the name Chopin. The solo part is obviously derivative, and the orchestral scoring too. It was played to a not overcrowded audience by Paul Badura-Skoda, and played brilliantly. But why couldn’t his gifted fingers have been occupied with notes of more account? The concerto is pleasant enough, nostalgic with reminiscences, and an old faded aroma. It was, in fact, the original “Warsaw” Concerto.

The Polish orchestra at its second concert was conducted by none other than the young Australian Charles Mackerras, who directed these expert instrumentalists through a smart-cracking performance of Shostakovich’s Ninth Symphony. Though the playing here was generally excellent, I could not recognise the full tone and precision which impressed me so much at Saturday’s concert. Maybe Mr Mackerras, for all his skill, had been unable at rehearsal to achieve complete communication of his ideas. None the less, the Polish orchestra maintained a standard of execution equal to Britain’s best. The woodwind, especially, revelled in Shostakovich’s cock-a-hoop wit. I expected, at the end of the performance, Mr Mackerras to indicate to these virtuoso players to rise and share prominently the audience’s applause; but he did not, not obviously, at any rate.

The Ninth Symphony of Shostakovich is really one of symphonic music’s best jokes. Apart from one strange, almost bodeful visitation, the work guys the pomposity of the traditional symphony or rather the post-Beethoven. “Middle German” symphony. Possibly Mahler gave Shostakovich the irreverent cue; but Mahler was never as arrogantly and rampantly on the symphonic “bummel”, so to say—on the spree—as Shostakovich in his short Ninth Symphony. Mahler’s humour is usually wry, with a touch of the grotesque in it. Shostakovich cracked his jokes with relish. The tunes are Till Eulenspiegelish. The trombone in the first movement has a musical guffaw and yawp all to itself. The pace of the music, and its “spin,” suggests that Shostakovich, who is becoming an image of his country’s aloofness with rather inimical implications is at times the Rossini of contemporary Russian music. Which is saying much.

Recorded by the BBC at the Edinburgh Festival on August 27, 1962, this concert by the Polish Radio Symphony was never broadcast in Britain. Transcription discs were sent to various stations in the United States and were clearly marked “expires 3.9.66.” Fortunately, one set “happily … fell into the hands of a collector” and this disc is the result. What previous connection “the brilliant young conductor”—so described in the accompanying notes—Charles Mackerras had to the orchestra is something of a mystery, but it’s clear that this then little-known Warsaw Pact ensemble clearly felt it had something to prove. And while Dvořák is a well-known commodity in the extensive and varied Mackerras discography, Scriabin and Shostakovich are not.

The performance of the Shostakovich Symphony which began the program is a fairly astonishing one, especially in the bracing tempos which occasionally veer into the lunatic range. The opening movement, for instance, races along at a ferocious clip, the orchestra’s winds—the piccolo especially—displaying a prodigious virtuosity. Apart from one brief episode when the massed strings seem ready to fly off the handle, this is one of the most precise and exciting versions of the movement on record, a tribute to what was clearly one of best Iron Curtain orchestras of its time. The orchestra’s principal bassoon has an intensely felt moment in the symphony’s brief Largo, the eloquence of the playing allowing us to ignore the rather thin, reedy sound common to Eastern European bassoons of the day. The final, madcap horse race to the end is electrifying in its daffy intensity, reminding us why Stalin was so angered by what was supposed to have been a triumphant victory symphony in praise of his contribution to the recently concluded Great Patriot War. (Having virtually eliminated the Red Army’s senior officer corps during the Great Purge, his initial response to the news that Hitler had violated the Non-Aggression Pact in June of 1941 was to lock himself in his Kremlin apartment and get drunk, leaving the Soviet Union leaderless for 10 crucial days.)

If the Austrian pianist and Mozart-Beethoven-Schubert specialist Paul Badura-Skoda might seem an unlikely champion of Alexander Scriabin’s youthful Piano Concerto, then his ardent yet carefully worked out interpretation ranks with the finest recorded performances currently available; in fact, it’s only a notch or so below the stunning BIS recording (2088) with Yevgeny Sudbin, Andrew Litton, and the Bergen Philharmonic. The Polish Radio Symphony is as warmly supportive here as it was wild and unbuttoned in the Shostakovich, with a string tone that feels especially lush and embracing.

Apart from some occasionally tentative voicing in some of the early variations—suggesting that rehearsal time may have been limited—Mackerras’s view of the Dvořák Symphonic Variations is altogether typical of his natural, idiomatic way with Czech music (he spent a year in Prague studying with Václav Talich and spoke serviceable Czech) coupled with the festival atmosphere that clearly inspired an already fired-up orchestra. It provides an especially satisfying conclusion to a rewarding concert that fills some fascinating gaps in a great conductor’s discography.