"This is a valuable corpus of recordings, splendidly transferred" - MusicWeb International

Although Bruno Walter claimed late in life that he had made his first recordings around 1900, his earliest documented discs date from 1923 when he began a series for Grammophon/Polydor in Berlin, most of which have been reissued on Pristine PASC 142 and PASC 322.  In May, 1924, Walter was in London for the first presentation of a German opera season at Covent Garden since the end of the Great War.  That month, he conducted Wagner’s Ring cycle, Tristan und Isolde, and Strauss’ Der Rosenkavalier in enthusiastically-received productions featuring Frida Leider in her Covent Garden début, Lauritz Melchior, Friedrich Schorr, Lotte Lehmann and Elisabeth Schumann.

On May 22, Walter entered the Columbia studios at Petty France to make the first in a series of discs for a label with which, on one side of the Atlantic or the other, he would be associated for much of the rest of his life.  A Siegfried Idyll was recorded that day, followed by the first three sides of Strauss’ Death and Transfiguration the following day; however, neither was approved for release.

It would not be until the following December that Walter, who had returned to London to conduct the (old, pre-Beecham) RPO in a performance of Elgar’s First Symphony in the presence of the composer, would be back in the Columbia studios.  Over the next five days, he would preside over four recording sessions, one of which was devoted to a single title (Mozart’s Marriage of Figaro Overture) which ultimately remained unissued.  Four further sides would be recorded the following February before the microphone supplanted the old acoustic method of recording.

The present collection brings together all of Walter’s published acoustic Columbias.  It includes one recording (Weber’s Freischütz Overture) which was only released in America, as well as two which were only published in Britain (the “Rhine Journey” and Siegfried Idyll).  A further recording of “Siegfried’s Funeral Music” from Götterdämmerung which came out on American Columbia credited to Walter was actually conducted by Hamilton Harty.

The repertoire chosen largely follows the composers and even some of the particular works with which Walter was making a name for himself at Covent Garden at the time – much Wagner, along with Strauss – and includes several works to which Walter would not return again in the studio (the Mendelssohn, Berlioz and the Tristan “Liebestod”).  The playing of the orchestra is variable, both in ensemble and pitch; and some of the tempi seem a bit speeded up in order to get the music onto a single side (particularly in the Mendelssohn and the Meistersinger Prelude).  Elsewhere, though, Walter is given the opportunity to take as long as he wants, with the Weber overture spread over three sides, as it would not be in his Paris remake fourteen years later, and the “Liebestod” generously given two 12-inch matrices for its six-minute duration.

The transfers for this release drew wherever possible upon American Columbia “New Process” pressings (for the Weber, Mendelssohn, Berlioz, Strauss and Wagner “Liebestod”) which featured the most (relatively) quiet surfaces available, and English Columbia discs for the remainder.  From its original release onward through all modern discographies I’ve seen, the Berlioz has always been misidentified as the “Dance of the Sylphs” rather than as the “Minuet of the Will-o’-the-Wisps”, to which it has been corrected here.

All recordings made in the Columbia Petty France Studio, London 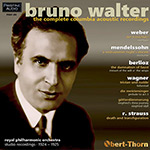 Despite the primitive nature of the horn recording, these are especially important examples of Walter’s art

All of Bruno Walter’s 1924-25 acoustic Columbia recordings fit into this handy 76-minute disc. They were made at the company’s Petty France studios in London, which was not always the most responsive environment for large-scale acoustic recording but which managed to yield a good return over the years. And the A&R men chose repertoire wisely, encouraging Walter to record Wagner, Strauss, Weber, Berlioz and Mendelssohn; he had just starred in Covent Garden’s German Season directing the Ring, Tristan, and Der Rosenkavalier. Indeed, despite the primitive nature of the horn recording, these are especially important examples of Walter’s art as he never returned to the studio to record the Tristan Liebestod, the Midsummer Night’s Dream music or the Berlioz excerpt.

Weber’s overture to Der Freischütz, which was only issued in America, can be heard over two sides. There are the usual bass reinforcements and the strings slither about as was then fashionable – especially noticeable in the ad-hoc British set-up of the time – but the direction is authoritative. I assume one of the Brain family was drafted in for the Mendelssohn Nocturne on a freelance basis whilst the Berlioz goes vey agreeably. The Liebestod sees the strings on so-so form and the winds’ intonation wanders - there’s a degree of pitch battling to be heard. Just before they recorded the Tristan extract Walter and the band tackled the Prelude to Act III of Die Meistersinger and here one can hear the first desk fiddles sawing happily away – this was the band known as the Royal Philharmonic Orchestra, though it was much earlier than Beecham’s orchestra of the same name. One wonders how much rehearsal time was available as ensemble is approximate and the stygian bass reinforcements sound very treacly. But of enthusiasm there’s no shortage.

Most of these pieces had already been recorded by 1924 and that goes for Siegfried’s Rhine Journey. In fact, Walter’s was not even the first British recording as Percy Pitt had made a disc of it back in 1921. The Siegfried Idyll took up four sides of two 78s. Walter does little actively to resist the lashing of sentimental portamenti, mostly – thankfully – uniform. Though the bass reinforcements tend to glue it down and prohibit maximum flow, it’s an endearing reading and can be listened to in the context of the near-simultaneous recordings of the piece made by Albert Coates, Leo Blech and Siegfried Wagner’s own recording. The other major undertaking is the last, Strauss’s Death and Transfiguration which stretches 21 minutes. This must have been suggested because of Walter’s operatic prestige in Strauss. Perhaps surprisingly Columbia was a Johnny-come-lately as Abendroth, Coates and Eduard Mörike had all recorded it by then. Walter’s searing reading is hindered only by the circumstances of the recording and the unfamiliar orchestra.

This is a valuable corpus of recordings, splendidly transferred. As I’ve noted before Pristine is doing worthwhile work on behalf of Bruno Walter’s early recording career, which has long been overlooked in the world of sonic restoration.