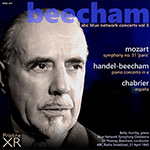 At the fiery conclusion, the audience roar clearly expresses their recognition of a true “lollipop”

The third volume of this series (Volume 1 ~ Volume 2) traces a congenial concert of Mozart, Handel and Chabrier that is all over well within the hour. The central work is that hyphenated and hyperbolic construction, the Handel-Beecham Piano Concerto. In this the Bart has ransacked some memorable themes to stitch together a concerto of sorts, a vehicle for his new wife Betty Humby who here gives the work its first radio broadcast. The premiere had been given a little earlier, on 15 March 1944, again in New York. As Andrew Rose notes, Beecham and Humby recorded it in London the following year but he is not quite right in his dating. Most of the recording comes from January 1945 but the Romanza was set down successfully in October of that year (the then unpublished performance can now be found on Somm). There are no huge interpretative differences in as slight a piece as this, but it is noticeable that the very stately opening was tightened up a few months later in the London studio inscription. This charming work, full of rococo trills and burnished romance, is graced by excellent string playing – fully affetuoso when called for - an especially fine first flautist, and a few minor digital derailments from Humby. As picked up by the microphone, her piano tone isn’t quite centred in the balance; it tends to be a bit recessive.

Beecham was still in his early-mid period approach to Mozart’s symphonies. However beautifully shaped some later recordings were, there was sometimes a hint of too-manicured phrase tapering. Here he takes the Paris with all his accustomed vitality. His earlier LPO recording, which can be found on Dutton and elsewhere, is full of the kind of swagger and driving intensity that can be heard in this New York reading. The lower strings shine, the forward tuttis register powerfully, and the elegant and Andante never drags. Elegance and trenchancy are held in perfect equipoise. As a bonus we hear one of his encore favourites, a piece he loved playing and recording – Chabrier’s España. Deftly rhythmic and virtuosic it elicits voracious, applause which bulks up the playing time to precisely the 6:30 or so he took in his RCA reading. In New York he whipped up a quite different and more kinetic kind of storm.

On my review copy rogue discographic information relating to a Rudolf Kempe disc has migrated to the back of the jewel case, though this is presumably easy to correct. The engineering is fine and it’s always good to hear announcer Milton Cross adding period flavour to the proceedings.

The concert by Sir Thomas Beecham and the “Blue Network Symphony Orchestra” of 21 April 1945 certainly assumes a more optimistic tone than that which occurred as President Franklin Roosevelt had been laid to rest. The high energy of the occasion bursts forth immediately, with Mozart’s 1778 D Major “Paris” Symphony, expressly conceived to parody the musical conceits of the day, such as the so-called premier coup d’archet, or the Parisian version of unison Mannheim rocket figures at a symphonic opening. The addition of trumpets and tympani – and the clarinets – increases the often ceremonial pomp of the performance. Throughout the performance, Beecham emphasizes the suave grandeur Mozart controls in this, his largest symphonic structure in his oeuvre at the time. The virtuoso syncopations of the last movement move with a lithe suppleness that makes this rendition a worthy companion to Beecham’s commercial endeavor with the Royal Philharmonic Orchestra.

Beecham himself arranged various Handel melodies and tropes to create the four-movement Piano Concerto in A, expressly for his new wife, Betty Humby. Handel emerges as a Romantic, his textures lush and flavored by all sorts of nice touches between the keyboard and the woodwinds, especially in the middle movement Romanza. The first movement Chaconne exploits a bass pattern we know from Edwin Fischer’s early recording.  The Menuet movement, staid and galant, embodies the soul of aristocratic elegance. Despite the “popular media” version of Handel proffered by the Beechams, the effect has its moments of intimacy and elated fervor.  With the Finale’s glad spirits, we have a concertante pastiche of Handel pleasantry. Humby performs with a speed and lithe grace that suggest she would have been a natural acolyte of the Mendelssohn concertos.

Beecham called Chabrier’s Espana “the best of quasi-Spanish music yet written.” In one Leonard Bernstein’s Harvard lectures, he pointed out the “poetic,” architectural and symmetrical features in Chabrier’s brilliant scoring for this “Rhapsodie.” The Blue Network horns and winds, as they had been in the Mozart, project a brisk, alert sonority, fresh and vivid, as tends to be Chabrier’s wont. At the fiery conclusion, the audience roar clearly expresses their recognition of a true “lollipop.” The restored sound by Andrew Rose raises the level of sonority well above anything like AM radio.