This 1949 Eroica, one of seven broadcast performances Toscanini conducted during his years with the NBC Symphony Orchestra, is regarded by the few who have heard it as one of his greatest performances of the work - possibly even his finest. We present the full broadcast here, complete with announcements and the preceding Coriolan Overture.

My source material was drawn from two original recordings: whilst the first two announcements are of lower, perhaps AM radio quality, all of the music and the final announcement derive from near-mint full-frequency high fidelity discs which I would assume were cut directly by NBC. I've tried to minimise the effect of transitions between these two sources; suffice to say that the opening announcement does not faithfully represent the glorious sound quality of the music which follows, so don't be alarmed!

As with previous NBC/Toscanini recordings, I've modified the dry studio acoustic using the sonic "fingerprint" of one of the world's finest symphony halls, something which greatly enhances the orchestral timbre in a completely natural manner. This really is a quite wonderful addition to our Toscanini catalogue. 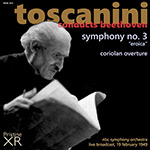 For those who, like me, often find themselves wondering why this conductor had the reputation for greatness that he undeniably did, hearing these performances provide a riveting answer

Pristine’s Andrew Rose has preserved here, in stunning sonics, the complete NBC Symphony broadcast of February 19, 1949, complete with Ben Grauer’s announcements (which are separately tracked so you may skip them). Almost a year later, in late November and early December of 1949, Toscanini and the NBC Symphony made a studio recording of the “Eroica” for RCA, which is best heard on a compact disc (RCD1-7197) excellently remastered by Ray Hall. The studio recording was made in Carnegie Hall, which gives it an inherent advantage over the dry acoustics of Studio 8H. Pristine has solved that to some degree, with the addition of some very natural-sounding ambience and his XR stereo method, giving a real sense of space to this originally quite dry recording. Since Toscanini evidently preferred a close-in microphone placement, his Carnegie “Eroica” lacks the true spaciousness of the acoustic of that hall, so the difference in sound between the two recordings is now quite insignificant.

What is significant is the extra flexibility and suppleness of phrasing, particularly in the Funeral March, but also in the other movements, found in this performance when set against the 1949 studio version. It is hard to know whether to pin that on the presence of an audience, or the fact that it is a true performance given without a safety net, but there is a stronger emotional impact in this performance than in the later commercial recording. Sforzandi are a bit more extreme in the outer movements, rhythmic pulse is just a touch stronger, dynamic variety just a bit wider here. The slashing chords and dissonances of the first movement come alive here in a way that they do not, for me in any other Toscanini recording of this piece.

There are five Toscanini “Eroica” performances of which I am aware, and what is most impressive about them is the consistency of his view of the music between 1939 and 1953, though surely the 1939 recording is somewhat more plastic in its phrasing than the later ones. Different Toscanini reviewers have expressed preferences for different versions, but the truth is that they are all similar and great readings (and this is coming from someone who frequently fails to respond to Toscanini’s conducting). This piece seems to bring out the best in the conductor, marrying his rhythmic energy and his sense of drama to a broad singing line and depth of orchestral sonority that I have not always found present in his conducting. For what it is worth, this 1949 radio broadcast is the one to which I will return most frequently. There is a relentless drive to the music that keeps hurling us all toward its conclusion, a power blended with a nobility of phrasing that stays in the memory. The raw power of Toscanini’s conception is cumulative in all of his recorded performances, nowhere more than here. Part of my preference for this performance is the sound achieved by Andrew Rose in his restoration. Just compare the opening two chords of this with the RCA studio recording made nine months later. Those famous chords have a solidity and weight here that is not matched, despite the Carnegie locale of the later sessions.

The broadcast opened with a sizzling account of Beethoven’s Coriolan Overture, equally well reproduced here. For Toscanini collectors, this is a very important release. For those who, like me, often find themselves wondering why this conductor had the reputation for greatness that he undeniably did, hearing these performances provide a riveting answer. Henry Fogel

This CD contains a complete NBC broadcast including announcements before and after both works. The Coriolan overture was written for a production of Heinrich von Collin’s play of the same name rather than Shakespeare’s Coriolanus. The NBC announcer acknowledges this but, presumably reading from a script, repeatedly refers to the work as “The Coriolanus Overture”.

This oddity need not deter us from enjoying Beethoven’s masterly seven or eight minute distillation of the tragedy of a Roman general torn between what he perceived as his military duty and the pleadings of his wife for peace. The dramatic music at the beginning and later represents the martial side of his dilemma while the tender music symbolises his wife’s supplications. This reading lasts for less than seven minutes. When Toscanini performed this overture a few years later he took about a minute longer, which you would expect to have allowed greater scope for characterising both aspects of the music. Still, I wouldn’t suggest that this powerfully played 1949 performance necessarily sells the characterisation short, despite its faster speed.

It has been said that in the late 1920s, Toscanini took five minutes longer over the Eroica Symphony than he did during his subsequent tenure with the NBC Symphony Orchestra. Those earlier performances, seemingly not preserved in recordings, must have been majestic indeed. Nevertheless, this 1949 NBC event has its share of majesty and other qualities.

In the first movement, the sharp rhythm with which the main theme is first played announces that this will indeed be a con brio performance. It does not lack the necessary spaciousness, as one senses rather than observes the subtle rubato Toscanini uses as the music unfolds. In the liner notes, Jack Diether calls attention to the end of the coda, where Beethoven repeats the opening theme four times. In the final repetition, Toscanini departs from the score but follows his usual NBC practice in having his trumpets dominate as they play the whole theme, rather than part of it. Diether says that “the dramatic power of this practice is overwhelming, it is aesthetically right …”. I agree with this in the context of Toscanini’s view of the work, but would note that, as other conductors have shown, it is not the only way of playing the passage convincingly.

The slow movement has always been the centrepiece of this conductor’s Eroicas. He doesn’t rush it and no performances I’ve heard surpass his in expressing the feeling of tragedy implicit in Beethoven’s score. There is some string playing of great eloquence and around 1:40 the grieving cellos almost seem to speak. A mighty climax is built. Throughout, there is great textural clarity.

The third movement is suitably sprightly but, compared to many others, the horns in the trio are noticeably reticent. The clipped nature of their playing provides a clue that the conductor is mainly responsible. Under many conductors, the horns play espressivo here, regardless of what the score may say. I suspect Toscanini didn’t relax his beat sufficiently to allow this to happen. In addition, the engineers may have balanced the horns too distantly. The players should, I think, be exonerated.

The Finale gets off to an arresting start without the kind of unpleasant, whiplash attack which seems to occur in Toscanini’s 1939 broadcast – discussed below. This 1949 performance proceeds majestically with much detail observed on the way. In the coda, however, the horns again disappoint and the reasons are the same as in the previous movement: not enough flexibility from the podium and a somewhat backward balance. Still, nothing really stops this Eroica from reaching a rousing conclusion.

The sound quality of this restoration is warm, which is untypical of most recordings emanating from this venue: the notoriously dry Studio 8H. For this, we can thank Pristine’s addition of an acoustic ‘fingerprint’ from an unnamed but excellent concert hall. The frequencies are slightly attenuated at both ends of the range but the sound is very serviceable, distortion free and blessed with a quiet background. The audience is quiet, too.

In order to compare performances and sound, I listened to Toscanini’s 1939 broadcast of the Symphony which almost certainly came from Studio 8H, also. My CD was produced by Grammophono 2000 using the CEDAR process. To judge by its results, this process was able to minimise distortion and noise but did not add warmth. The sound is of the dry, harsh, top-heavy type traditionally associated with NBC recordings made in this studio. The performance has also been issued on other labels, including Music and Arts in their set of the conductor’s 1939 survey of all the Beethoven symphonies (review) and by Living Era coupled with the Fifth Symphony on a single CD (review).

The 1939 performance is similar in outline to its 1949 successor, except that the slow movement at 16:25 takes just over a minute longer. There is remarkable internal clarity, which can be attributed to the great precision of the playing but also to the dry acoustic. I would rate this reading of the movement as even finer than the 1949 traversal but the sound is not enticing.

The other three movements in 1939 sound faster than their 1949 counterparts, but the timings show that they are not. Each movement runs to within a few seconds of the same movement in the other performance. I put the apparent speed of the earlier performance down to the sometimes-remarked tendency of thin sound to make a tempo sound faster than it is. I now think the aggressive-sounding opening of the 1939 final movement may be due to the sound quality as much as the conductor.

Taking it as a whole, this 1949 performance is, I think, a great one, despite any incidental niggles one might have. The much superior sound of Pristine’s restoration makes it a better choice than the 1939 recording, even if the latter rivals it in artistic quality.