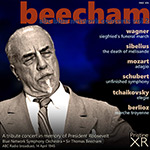 A national moment of silence precedes the broadcast concert of the Blue Network Orchestra led by Sir Thomas Beecham – the 14 April 1945 concert coincides with the funeral service for President Franklin Delano Roosevelt – and the program Beecham leads reflects the spirit of valediction. The famous Siegfried Funeral March from The Twilight of the Gods receives a potent, albeit direct, realization from Beecham’s responsive players, a linear approach we might ascribe to Toscanini.  Even more pathos-ridden, the English horn solo and strings that constitute the first section of The Death of Melisande (1905) makes a lachrymose impression that remains special, even in the extensive Beecham canon of Sibelius. After a relatively genial, nostalgic middle section, the return of the somber strings leaves us emotionally drained.

The Adagio from Mozart’s second divertimento for strings, that in D Major, K.131, adds a distinct element of old-world grace to the occasion.  The diaphanous strings trills assume a hue, an intimation of mortality.  The second period in the music, with its sudden ff, expresses a level of otherwise understated anguish in musical moment that approaches Handel for exquisite, melodic fervor. The major work, Schubert’s Unfinished Symphony, assumes an air of guarded mystery and often aggressive fire in the opening Allegro moderato. Beecham subdues the brass parts to allow the famous string melody resonant primacy. But this music of solace breaks off and enters an abysmal realm of profound grief which Beecham invests with demonic power. We sense that, had Beecham the benefit of sound enhanced beyond the monaural resources of AM radio, the effect would have been truly overpowering. The E Major Andante con moto communicates a poignant dignity, solemnly martial, enhanced by the colors from the clarinet, oboe, French horn, and distant tympani.  An announcement interrupts the broadcast of this movement; then the music resumes – having missed the Delius component – with the heart-rending, diaphanous Elegie from Tchaikovsky’s C Major Serenade for Strings, a work Beecham never committed to commercial issue.

The program concludes on a more stoical note – the Trojan March of Berlioz – and even the spoken introduction by Milton Cross conveys an air of uplifted resolve.