"Full of the most charming subtlety and warmth, and fully ranks alongside his pre-war Vienna performance" - MusicWeb International

Having previously appeared as a guest conductor on NBC Pacific's Standard Hour programme, Bruno Walter found himself back on the air on 18 April 1954 with the San Francisco Symphony Orchestra and guest soprano Brunetta Mazzolini - just four days before conducting the orchestra (and Mazzolini) in their first ever performance of Brahms' A German Requiem.

Although sections of this concert may have appeared briefly before, I understand that the high fidelity sound quality heard on this release sets it apart from previous outings by a considerable distance. Here we present the concert in its entirety as broadcast. It also has great musical value, as Fanfare's assistant editor James A. Altena explains: "It's especially welcome because Walter's live performances of Eine kleine Nachtmusik are much superior to his studio recordings, which with but one exception (Vienna 1936) are disappointingly wooden and heavy.  This has real life to it!"

The recording benefits from clear, clean and bright sound, with full and well-rounded orchestral tone - and a quiet and unobtrusive audience. 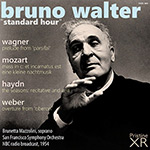 Once again, Pristine has produced a winner; enthusiastically recommended

I think this is the first time I’ve ever been quoted as (in effect) promoting a release before its publication! Knowing of my devotion to Bruno Walter, Andrew Rose of Pristine Audio forwarded to me an advance sound clip for this planned issue of a complete Standard Hour NBC Radio broadcast. I sent an enthusiastic email reply, and lo and behold part of it appeared as a promotional blurb on the release announcement that also is printed on the CD front tray insert card. Not that I’m complaining, mind you; I’m both amused and flattered. For the record, here it is: “It’s especially welcome because Walter’s live performances of Eine kleine Nachtmusik are much superior to his studio recordings, which with but one exception (Vienna 1936) are disappointingly wooden and heavy. This has real life to it!”

And, yes, I stand behind that statement 100 percent. I still have the dim-sounding bootleg Italian CLS LP that also contains this concert—though not for much longer, as this splendidly remastered version from a much superior source makes the vinyl version sound positively ludicrous by comparison. The sound quality here is that of a good, clear monaural radio broadcast from its era. While—as one already knows from Pierre Monteux’s 78-rpm recordings—the San Francisco orchestra at that time was nowhere near as technically polished an ensemble as it is today, its members are obviously responsive to Walter’s baton and play expressively for him.

The program is a mixture of three Walter favorites and two novelties. Walter left us six performances of the Parsifal act I Prelude: three studio recordings, from 1925 and 1927 (both with the Royal Philharmonic) and 1959 (with the Columbia Symphony Orchestra in its West Coast incarnation, and coupled with the act III Good Friday Spell music), and three live performances, with the Los Angeles Standard Symphony (June 19, 1949), the New York Philharmonic (December 28, 1952), and this one from 1954. The New York performance is the slowest (14:00), followed by the CSO studio account (12:51); the 1927 RPO version is the fastest (11:04), with the other three coming in at 11:52 (RPO in 1925) and 12:15 (both live California performances). California seemed to hold the magic spell for Walter in this score; the two early British electrics suffer from dated sound, and the live New York performance (which has only been released in misdated issues on older bootleg Italian CD labels) has not enjoyed a proper remastering but seems to suffer from a bit of stasis rather than timelessness. While the 1959 studio recording claims pride of place, both sonically and interpretively, the two live performances from 1949 and 1954 are very fine and may appeal more to those who prefer more forward movement in this score. They are of about equal merit, though I subjectively have a slight preference for Los Angeles here.

In my review of Walter’s 1950 Stockholm concerts in 39:5, I provided a table of Walter’s seven performances—four studio efforts and three live ones—of the Mozart Serenade and discussed them in some detail there. In that review, not knowing of this impending release, I awarded the Stockholm performance the palm in the Walter discography. However, with its refurbished sonics this account now arguably takes precedence instead, having both significantly better recorded sound and just a touch more energy in the finale despite virtually identical timings in all four movements.

For the Oberon Overture there are four surviving renditions by Walter: a 1931 Berlin Philharmonic performance on film; an NBC Symphony broadcast in very tinny Studio 8-H sound from March 18, 1939; a Los Angeles Standard Symphony broadcast, again from June 19, 1949; and this one. The timings are virtually identical—8:27, 8:36, 8:19, and 8:22 respectively—and, as that suggests, the interpretation remains virtually unchanged over 23 years. Walter was a superb Weber conductor (Der Freischütz was a favorite opera of his, and it is a great pity we do not have a surviving recording of any part of it beyond the Overture from him), and his account of this overture fully captures both its ardent Romantic lyricism and almost puckish humor. In this instance the present San Francisco account is the clear favorite, with superior sound and more expressive shaping of phrases.

The two novelties are the arias from the Mozart Mass and Haydn oratorio, the latter sung in English rather than German. Information about soprano Brunetta Mazzolini is rather scanty: I have not been able to find dates of either birth or death for her, but she was presumably born around 1930. A native of Portland, OR, she was trained at the Curtis Institute in Philadelphia and won the Metropolitan Opera regional audition for the Northwest in Seattle on January 5, 1958; Lotte Lehmann wrote a letter of recommendation on her behalf, but she apparently never made it onto the stage in New York. She made her career primarily on the West Coast; online census data records I could not fully access indicate that she married and later divorced. By 1954 she was singing under Bruno Walter in San Francisco, and later in Chicago, in the Brahms German Requiem and Mozart Requiem among other works. (She also sang the Mahler Fourth Symphony, though not with Walter, but he surely coached her in the part.) Her voice was that of a light soprano, brilliant in texture and well produced (think of Hilde Güden), with fine diction and intonation; one can see why Walter took her under his wing, and one wishes that more of her artistry was preserved.

In sum, then, we have here a fine Parsifal Prelude, the preferred recordings in Walter’s discography of the Oberon Overture and the Mozart Serenade, plus the additions to the conductor’s discography on CD of two unique arias with a quite fine soprano soloist, all presented with Pristine’s usual excellence in restoration of historical recordings. As usual with this label, the disc comes with only a list of contents and a brief liner note. Once again, Pristine has produced a winner; enthusiastically recommended to both fellow Walterians and to collectors of historic orchestral broadcasts in general.

This article originally appeared in Issue 40:1 (Sept/Oct 2016) of Fanfare Magazine.

NBC Radio’s Standard Hour Broadcast No.1410 preserved a 56-minute performance given by guest conductor Bruno Walter and the San Francisco Symphony on 18 April 1954. The broadcast is topped and tailed by a preserved introduction and radio close, spoken by the announcer John Grover, something that always strikes me as enshrining the true atmosphere of the event.

Given the timing constraints the programme is somewhat bitty, though two substantial orchestral pieces frame the concert. The first is the Prelude to Parsifal, a work that was long established as part of his discography. The best-known example, coupled with the Good Friday music, was to come a few years later in 1959 when he directed the Columbia Symphony. Other performances though have survived, not least in New York in 1952 and with the Los Angeles Standard Symphony in 1949, which was revived by Music & Arts. Two of the more discographically venerable, however, and these are of particular interest to Walterites, are the London 78s made in 1925 and 1927, when he directed the orchestra of the Royal Philharmonic Society. This San Francisco reading – which was released on LP (CLSRPOL2031) – is moulded with distinguished lyricism and control. Though powerful in impression, it’s kept moving phrasally and with acutely judged rubati. Timings are deceptive here; post-performance speech bloats the track listing – Walter actually takes it in 12:20.

The other larger work is the piece with which he ends the performance, the overture to Oberon, which is also on the LP noted, as well as having been released on AS Disc. Verdant and full of brio it takes an honoured place alongside his earlier recordings with the NBC and LAPO. Soprano Brunetta Mazzolini was clearly a local favourite and had appeared on Standard Hour broadcasts before: at the time of this one she was on the staff at Portland. Importantly, Walter left behind no studio recordings of Mozart’s Mass in C minor, so this is a tantalising glimpse of the Et Incarnatus est. Mazzolini has a fine technique, and her voice is bright and relatively light. Again Walter didn’t conduct Haydn’s The Seasons in the studio so once again Mazzolini’s singing of two movements is all we have. Once more she evinces fine, focused singing, in English. This too was on the now rare LP noted as well as having been issued on a Japanese Bruno Walter Society LP.

Perhaps surprisingly, and despite these discographical novelties, it’s the most superficially hackneyed of the works, Eine Kleine Nachtmusik that proves the most quietly revelatory. It’s full of the most charming subtlety and warmth, and fully ranks alongside his pre-war Vienna performance. There’s not the tiniest hint of routine in this delightful reading.

Whether this will sway you to buy this disc depends on the depth of your allegiances to the conductor. The novelties here – though relatively brief - will certainly be tempting to the tightly-focused collector.