"You simply must get this disc; urgently, even insistently, recommended" - Fanfare 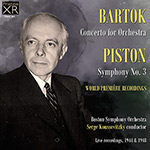 The performance is absolutely riveting in its intensity, ranking among the very greatest of all the many recordings accorded to this extraordinary masterwork

Andrew Rose and his Pristine Classical enterprise seem poised to break the bank for my 2016 Want List, and not just for Bruno Walter items. As doubtless virtually everyone reading these lines knows, Serge Koussevitzky famously commissioned Bartók’s masterpiece, and gave its world premiere with the Boston Symphony on December 1, 1944; this broadcast from 30 days later was the fourth in a series of six performances that the conductor accorded the new score. Almost equally well known is the fact that in light of these performances the composer revised the finale, greatly strengthening it with a more extended and far more satisfactory close. The performance thus presents the original, shorter version, which does enjoy a few modern recordings as well, and it is certainly of interest to hear the composer’s initial thoughts. Far more importantly, this almost miraculous remastering is light-years ahead of all the previous incarnations that have circulated on various labels. The orchestra finally sounds like a real orchestra, not something squeezed out of a sonic toothpaste tube, revealing a range of dynamics and instrumental timbres one could only dream of before, with the double basses (Koussevitzky’s own instrument, of course) having an especially remarkable depth, heft, and bite. It should hardly require mentioning as well that the performance is absolutely riveting in its intensity, ranking among the very greatest of all the many recordings accorded to this extraordinary masterwork.

Walter Piston ranks alongside Samuel Barber as being easily one of my two favorite American composers, and I consider it nothing short of a major scandal that his symphonies and concertos are not repertory staples in his own land. Equally shocking is the failure of half of these meticulously crafted and unfailingly inventive and engaging works to obtain more than a single recording. Symphony No. 2 has had four: studio recordings by Dean Dixon (issued only on a monaural LP), Michael Tilson Thomas, and Gerard Schwarz, plus a live historic performance with Sergiu Celibidache. Symphony No. 4 has had two (by Eugene Ormandy and Schwarz), as has Symphony No. 6 (by Leonard Slatkin and Schwarz once again; the latter’s originally projected complete Piston cycle for Delos was unfortunately cancelled after these three entries). With the addition of this historic broadcast, Symphony No. 3 now has three recordings to its credit, though the premiere one by Howard Hanson has never been issued on CD (a download of it can be had from Naxos). Fortunately the modern digital recording on Albany by James Yannatos and the Harvard-Radcliffe Symphony, coupled with two attractive works composed by Yannatos himself, is superior in every way to the roughly played and harsh-sounding Hanson version.

This live performance was the eighth in a series of 10 that Koussevitzky vouchsafed Piston’s score over a 12-month period, beginning with the world premiere on January 9, 1948. (O, for the days when new compositions were given multiple performances to introduce them properly to the public! But then, O for the days when more composers crafted substantive new works worthy of such attention, instead of sterile academic sonic abstractions or gimmicky gimcrack pastiches!) If this performance has circulated in a commercially available form before, I am not aware of it; in any case, it is an indispensable must-have acquisition for anyone who values American music and music-making. The work itself, cast in a standard four-movement framework with a scherzo in second position (though the first movement is unusually an Andantino), has all of Piston’s trademark fingerprints: a solidly Neoclassical aesthetic framework, well-crafted themes developed and explored with impeccable compositional technique, and colorful orchestration, with great rhythmic vitality in fast movements and refined lyricism in slow ones. The recorded sound, while not up to the best studio recordings of its era, is a step forward on the Bartók and quite listenable. Unless you are allergic to any 20th-century music more harmonically advanced than Puccini, Rachmaninoff, and Richard Strauss, you simply must get this disc; urgently, even insistently, recommended.