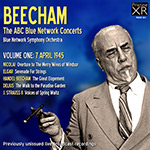 NBC expanded so rapidly that by 1927 it found itself with an excess of affiliates in the same cities, so it split its programming into two separate networks, called the Red and the Blue networks. After the Federal Communications Commission (FCC) declared in 1941 that no company could own more than one radio network, NBC in 1943 sold the less-lucrative Blue Network to Edward J. Noble, the millionaire maker of Life Savers candy, who initially renamed it the American Broadcasting System before settling on the name the American Broadcasting Company, Inc. (ABC). ABC was the smallest of the major radio networks and distinguished itself by hiring popular singer Bing Crosby to perform on a weekly variety series. As a precondition for his employment, Crosby required that he be allowed to prerecord the program for later broadcast; as a result, ABC became a pioneer in the field of magnetic recording.

Encyclopaedia Britannica  notes on the birth of the American Broadcasting Company

Wikipedia  notes on the birth of the American Broadcasting Company

During the Second World War Thomas Beecham made few friends in Britain by spending its four most dangerous years living abroad. He sailed for Australia in the spring of 1940, then moved to the United States. He became the music director of the then distinctly low-powered Seattle Symphony in 1941, joining the staff of the Metropolitan Opera in the following year. In all, the per­ipatetic Bart conducted nearly 20 orchestras during his stay in the New World, including the orchestra of NBC’s Blue Network, which thanks to an FCC ruling declaring that no single entity could own more than one radio network eventually became the American Broadcasting Company—today’s ABC. In New York for concerts with the Rochester Philharmonic during the first week of April 1945, Beecham conducted a Blue Network afternoon broadcast on April 7, and this is the result.

The sparkling performance of The Merry Wives of Windsor Overture with which the program began illuminates one of the central truths of Beecham’s career: Namely, that in spite of one of the most eccentric stick techniques in the history of conducting—to say nothing of a rehearsal technique that was even more mysterious—Beecham had the uncanny ability to make any orchestra sound better than it was. (A few years earlier he conducted a series of near-legendary concerts with the New York City Symphony, an orchestra made up of unemployed musicians organized as a pet project of the music-loving Mayor Fiorello La Guardia with funds from the WPA.) Possibly made up of members of the New York Philharmonic, NBC Symphony, and various freelancers—its actual composition at this stage remains a mystery—the Blue Network Symphony had at most a couple of rehearsals prior to the broadcast, and yet from the opening bars play like men possessed. The opening radiates the unique Beecham mischievousness and wit—could anyone make woodwinds chirp as delightfully as he did?—while the Overture’s big tune sings with the kind of soaring grace befitting one of the great opera conductors of his time.

Billed as the “radio premiere” of The Great Elopement, Beecham’s pick-up band plays this delightful confection—including the celebrated hornpipe which quotes Thomas Augustin Arne’s Rule, Britannia—as though it had been in their collective repertoire for years, while Delius’s The Walk to the Paradise Garden—another Beecham house specialty—erupts with considerably more heart-on-sleeve pathos than in the conductor’s commercial recording. Alas, the mid-1940s aircheck sound breaks up badly in the climaxes. If Beecham’s version of Frühlingsstimmen is not exactly echt-Viennese—Tales from St. John’s Wood would be a closer approximation—then it’s nonetheless suitably robust and joyous and brings a wonderfully entertaining album to a close. The incomparable Milton Cross’s spoken contributions only further enhance the period charm.