When the fifteen year-old Yehudi Menuhin stepped into the newly-opened Abbey Road studios to make his first concerto recording in November, 1931, he was already not only a seasoned recording veteran, but also a celebrated international phenomenon – a violin prodigy whose performances had amazed musicians and audiences alike, not merely by his technical abilities, but also by the emotional depth and maturity he was able to convey in his performances. 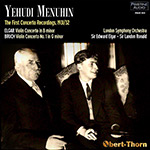 As someone who transfers recordings mainly from the 78 rpm era and whose concert-going experiences only date from the 1970s onward, I’ve rarely had the opportunity to hear the subjects of my restorations in performance, let alone get to meet them. But one who I had the privilege not only of meeting but actually spending some time with in discussion was Yehudi Menuhin.

Menuhin was in Philadelphia in February, 1982 to give the long-delayed local première of the Bloch Violin Concerto under Muti, and Ward Marston arranged for the two of us to meet him at his hotel for a taped interview. When we arrived on a Saturday morning at his suite at The Barclay on Rittenhouse Square (where Eugene Ormandy had a permanent residence), we were greeted by the sound of his practicing through the door he had left open for us.

He ushered us into the room, beginning with an apology for his performance at the concert the night before (which neither of us had attended, although I had a ticket for that evening’s performance), saying he had been told just before he stepped onstage of the death of his father in California. He immediately put us at ease, patiently putting up with our occasional ignorance with an avuncular benevolence.

I pulled out my old cassette tape the other night and played the interview again for the first time in many years. What struck me most, besides his patience and kindness, was his remarkable articulateness. The writing in his autobiography Unfinished Journey was exactly the way he spoke extemporaneously. We talked about his early career, his first recordings, his long friendships with artists like Kreisler and Thibaud, his thoughts on Furtwängler and Karajan.

One thing in particular struck me now, in light of my having just finished transferring his classic recording of the Elgar concerto with the composer conducting. He said that at the age of seven or eight, he was already able to understand the emotions behind works like the Tchaikovsky concerto and the Lalo Symphonie Espganole; but the short morceaux of Kreisler like “Liebesfreud” and “Liebesleid” took longer to grasp, for it meant learning to appreciate the whole of the Viennese experience that had led to their composition – the meeting of disparate cultures, religions and history that developed the peculiar Viennese character, which he saw as, to paraphrase, a love of pleasure almost because one had to accept what one couldn’t change.

It put more into perspective what the sixteen year-old Menuhin was able to accomplish in his recording of the Elgar concerto. He had only first come to England three years before, but already he was beginning to understand the character of the people, which he wrote in his autobiography was “a kind of passionate innocence, very different from the passions – volcanic, aggressive, sophisticated, etc. – of other countries.” Although he saw Elgar’s music as “English to the point of being almost unexportable”, he was able to understand – and, more importantly, convey – what I would call the longing, relinquishment and “carrying on” in spite of things that the concerto embodies.

It was that preternatural musical maturity that set the young Menuhin above the kind of technique-based prodigies whose videos fill YouTube today. And in these new transfers of his first concerto recordings (also including the Bruch G minor concerto), issued to commemorate the centenary of his birth, we can take the measure of this legendary performer at nearly the start of his long and illustrious career.

The emotional tenor of the performance, well beyond Menuhin’s tender fifteen years, astounds for the versatility and stamina of a natural wunderkind

The teenage Yehudi Menuhin recorded Bruch’s First Violin Concerto on November 25 and 26, 1931; and, due to that early success, inherited the mantle of recording Elgar’s Violin Concerto with the composer, an honor that would have been accorded to Fritz Kreisler, who had given the premiere with Elgar conducting in 1910, had he not proved uncooperative. The two recordings (of Bruch and Elgar) themselves have become legendary, and even those who, perhaps with good reason, might prefer Jascha Heifetz or Isaac Stern in Bruch’s work or Albert Sammons in Elgar’s (could Kreisler really have played it more convincingly?) must acknowledge Menuhin’s recordings as important ones, not only for the launching of his career but also as milestones in the history of violin recordings (at least it seems that way at a distance of 85 years).

It’s hardly necessary to comment extensively on these ageless performances. Mark Obert-Thorn said almost everything that needs to be said in discussing the story of early transfers. He mentions the centennial LP (for Elgar) in 1957 and the subsequent loss of the metal masters, the use of shellacs for reissues on CD, his own restoration for Naxos, and his decision to rely this second time on three Victor pressings (Z and Gold Label). In the case of the Bruch Concerto, for Pristine he again made use of Z and Gold Label recordings. (Naxos Historical had also paired the two concertos on its earlier release.)

There’s considerable noise at the beginning of Bruch’s concerto. As usual, Obert-Thorn has split the last movement of Elgar’s into two separate tracks (which he also did for Naxos in Heifetz’s and Sammons’s reissues), the second beginning with the accompanied cadenza. These desultory remarks don’t even pretend to be a review. Here’s a review for those who need one: These recordings have perhaps been legendary (as mentioned) since the days when Menuhin made them—they came out of the figurative corner with a strong spotlight trained on them. They both sound magnificent and make a powerful impact in Obert-Thorn’s latest attempt to dust them off. As a duster, he’s arguably the best (although I prefer some of BMG’s transfers of early Heifetz recordings). Everybody who cares about violin playing should acquire this piece of still developing history.