Furtwängler at his finest in two live performances of Brahms

"The sheer force and magnetism here is irresistible, and were I forced to choose only one it would be this" - Fanfare 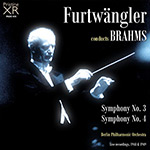 When considering “historic” recordings, the quality of reproduction is a more important factor than is often noted. Here, for example, are two stunning restorations by Andrew Rose for his Pristine label that vault these two performances to the top of my own recommendation list for Furtwängler performances of these two symphonies—and in fact to a very high place on the list of overall recommendations. One very slight problem; perhaps because of the very generous duration of almost 80 minutes, I find some of the pauses between movements a bit too short (more breath is needed in particular between the first two movements of the Fourth). But this is something a listener can work with.

The importance of color in Furtwängler’s conducting is often undervalued by commentators. We often hear about his approach to phrasing, his tempo relationships, his great attention to dynamic shading. But in fact the foundation of Furtwängler’s conducting was orchestral sonority and color. He built his sound from the bottom up, starting with a firm foundation of basses and cellos (as well as low brass where appropriate), and the balance of weight of different instrumental groups was of crucial importance to his conducting. Similarly the blending of voices, the voicing of chords, the varying degrees of vibrato, all were areas on which he clearly spent a great deal of time in his rehearsals, either verbally or simply through gesture. Thus it is critical that we hear Furtwängler performances in the best and most vibrant possible transfers. Both of these performances have been available before (just about every recorded note of the conductor has been preserved and issued in some form). Both have been heard on relatively good transfers on the EMI and Audite labels. But somehow Pristine has found a whole new level of quality. Heard in the label’s XR stereo, the sound has opened up, the bass is much richer, the highs warmer and less hard-toned, and the blend and balance far more evenly accomplished. The result is that we now have, in my view, the best recorded versions of Furtwängler’s way with these pieces, seminal in his repertoire.

There is a level of ferocity and intensity in the 1943 Furtwängler Brahms Fourth (also issued by Pristine) that is not equaled here—but that is so flame-filled that it is best savored for an occasional hearing, so it doesn’t lose its ability to shock. What we have here are two extraordinarily strong, individual performances, performances that clearly matter to the conductor and the musicians playing them, and performances that sweep the listener along on a sea of momentum. For the Third Symphony there is a 1954 Furtwängler performance, also on Pristine, that is quite lovely and somewhat more gentle. It is, in fact, beautiful. But the sheer force and magnetism here is irresistible, and were I forced to choose only one it would be this. Interestingly, the conductor takes the first movement repeat here, and did not in 1954.

Both of these performances demand to be heard by anyone who cares about 19th-century symphonic music and the performance tradition that underlies the art form. We should be deeply grateful to Andrew Rose and Pristine for the continuously high standards of their work.