WAGNER Tannhäuser – Overture and Venusberg Music ∙ Prelude to Act 3; Tristan und Isolde – Prelude and Liebestod (First Release)
PURCELL-STOKOWSKI  “When I am laid in earth” (Dido and Aeneas)
TCHAIKOVSKY Andante cantabile from Symphony No. 5; Dance of the Sugar Plum Fairy from The Nutcracker
PROKOFIEV  Three excerpts from The Love for Three Oranges

"They sound remarkable for their age. But then again, so did Stokowski" - Fanfare

With the publication this month of a Music & Arts set devoted to all of Stokowski’s recordings with the All-American Youth Orchestra and Hollywood Bowl Symphony Orchestra that had not yet been reissued on CD, the number of the conductor’s post-acoustic era output in that category has been greatly reduced.  The present release brings together all but one of the remaining such recordings, and adds a first release.  (The single holdout is Stokowski’s 1970 Unicorn LP of Panufnik’s Universal Prayer, which will not enter the public domain until 2041.)

The original labels of most of the items featured here credited “Leopold Stokowski and his Symphony Orchestra”, a pickup ensemble with which the conductor recorded almost exclusively for his RCA sessions from 1947 through 1953.  It has always been known that during these years, it consisted of members of the New York Philharmonic (which recorded exclusively for rival label Columbia at the time), the NBC Symphony, and top New York freelancers.  But what critic and discographer James H. North brought to light in an article published in the Spring, 2013 issue of the ARSC Journal was the actual mix of personnel:   Philharmonic members and freelancers far outweighed NBC players in participation.  The Tannhäuser selections which begin our program provide a case in point:  All of the players came from the New York Philharmonic except freelance oboist Robert Bloom.

For all the various arrangements of music from Tristan that Stokowski recorded over his career, it is remarkable that he made only a single published version of the “standard” Prelude and Liebestod, and that only in 1973, toward the end of his career.  The previously unissued recording presented here was made with the New York City Symphony, an ensemble that Stokowski created in 1944.  Only the first and last sides of the set survive in test pressings, but they are enough to indicate the white-hot intensity of Stokowski’s performance.

The cello soloist in Stokowski’s deeply-felt Purcell transcription is most likely Leonard Rose, who was listed as the first chair at that session.  The foreshortened single movement from the Tchiakovsky Fifth is a souvenir of the conductor’s appearance in the 1947 film, Carnegie Hall, in which he led this music.  The recording of the “Dance of the Sugar Plum Fairy” which was issued on single 78 and 45 rpm discs coupled with Mozart’s “Sleigh Ride” has often incorrectly been thought to come from Stokowski’s 1950 recording of the entire Nutcracker Suite, but it predates it by a year.  The celesta soloist here is future conductor Walter Hendl.

The Prokofiev selections with the NBC Symphony were originally recorded on three separate 12-inch matrices and then were dubbed to two sides.  I was lucky to be able to work from undubbed vinyl test pressings for the “Infernal Scene” and “March”, but had to use the sonically-compromised dubbed shellac release for “The Prince and the Princess”.  While the March has appeared on CD previously, it is now joined to the other movements to conclude our program of “firsts”.

7          TCHAIKOVSKY:  Dance of the Sugar Plum Fairy from The Nutcracker 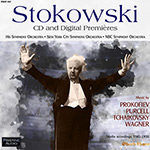 As producer and restoration engineer Mark Obert-Thorn notes in his booklet note, this release takes us one step closer to having every last note recorded by Leopold Stokowski available on CD. (His recording of Panufnik’s Universal Prayer remains at large, and presumably will remain so until 2041, when it enters the public domain.) This is excellent news for Stokowski completists, and good news for his many admirers. For everyone one else reading this headnote, they might be taken aback by the grab-bag nature of this release, which features an odd assortment of works, some of them in incomplete recordings.

The Tristan excerpts, recorded in 1945, are accidentally incomplete, one assumes. Apparently this comes from a two-disc test pressing, and the second disc (which would include the second and third sides) was either broken or has not been found. Thus, we get the first half of the Prelude and the second half of the Liebestod. Stokowski’s music-making is white hot, but you have to be fairly dedicated to put up with such bleeding chunks, which are even more bloody than usual. The excerpt from the second movement of Tchaikovsky’s Fifth (the movement’s second half, roughly) is a result of it having been featured in the 1947 film Carnegie Hall. It was intended more for movie-goers than for serious music lovers (not that the two groups can’t intersect).Too bad, because it’s an excellent performance, even though it is incomplete. The “Dance of the Sugar Plum Fairy” (Walter Hendl on celesta!) seems to have been a “B side” to a 1949 recording of Mozart’s Sleigh Ride. The tempo is luxuriously slow, and the effect is most seductive, especially if you have a venereal sweet tooth. Stokowski’s arrangement of Purcell also makes Dido sound hot and bothered; “When I am laid” indeed! Obert-Thorn guesses that the cello soloist here, in this recording from 1950, is Leonard Rose.

The Prokofiev excerpts were recorded in 1941 in New York’s “Cosmopolitan Opera House.” (Really?) The March has been on CD before, but not the other two movements. “The Prince and the Princess” languish with searing intensity, and so this is another worthwhile albeit incomplete find.

I’ve saved the best for last. The excerpts from Tannhäuser date from 1950 and feature the conductor and his musicians at the top of their form; even the women’s chorus (unidentified) in the Venusberg Music makes a memorable contribution. Although the music-making has a sweeping, theatrical spontaneity, one also senses Stokowski’s brain ticking away as he deploys one gorgeous effect after another. Unless you like Wagner to be boring and sedate, this is a performance that needs to be heard by any Wagnerite, perfect of otherwise.

Obert-Thorn’s transfers probably get everything out of the source material that there is to be gotten; they sound remarkable for their age. But then again, so did Stokowski. Scraping the bottom of the barrel? Well, maybe, but what happy scrapings!