"The recording is in relatively good condition, and the playing is masterful" - Fanfare

This 1952 Amsterdam recording was suggested to me in an e-mail I received a month or so ago: "I'm sure you get lots of folks saying to you why dont you get hold of such and such a record and work your magic on it. Here's my suggestion: A Philips LP of Beethoven 9 with The Hague Phiharmonic under Van Otterloo ...  I dont think it was that great a recording technically in the first place, but at the time I had the choice between it and the Vox Horenstein...I heard both before buying...and found it even more satisfying..."

Well the good news is that, underneath some very average pressings and somewhat constricted sound lurks a real gem, sonically- and musically-speaking. It really was very well captured indeed, and despite bring let down at the time by technical inadequacies in the microphone department, XR remastering has delivered a sound that's vital, full, clear, immediate and, where it matters, entirely thrilling! 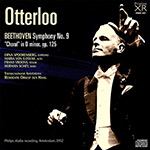 The playing is masterful ... It deserves to be heard again

This recording of Beethoven Nine was dragged up from the depths of bad pressings and failed CDs. Andrew Rose at Pristine has reconstituted it and given it new life. The recording is in relatively good condition, and the playing is masterful. It’s a good addition to the Beethoven Nine canon.

In the disc booklet, an old review is attached. A “T. H.” from Gramophone says “plenty of bass”: and Mr. T. H. is right. It’s a really thudding, bottom-heavy Beethoven, with great booming echoes, particularly after the bass interjections of the first movement. Some detail in the upper woodwind is inevitably lost, but it’s a pay-off I’m willing to have, for the sake of the menacing lower registers. The climaxes are a little cheesy, with huge sweeps of volume and heavy punches on the timpani, but this alleviates in the second movement with the delicate string melody that famously opens it. The timpani grows annoying after a while, and the booming lower end becomes distracting (my speakers were muffling and bouncing away even in the delicate bits). Where the microphones must have been placed, for this effect, I dread to think. However, the editors of the mix have done well to try and retain its heavy energy and coax the upper registers into being audible.

The second movement, for me, is the best. The choral movement, by contrast, is a nightmare, and Mr. Gramophone noticed this too: the “slight sense of sharpness” noticed in 1955 is still here, and the near shouting of the vocals grates a little. Who, though, doesn’t love “Ode to Joy”? It’s a competent rendering of it, though obviously weighed down a little by its cliché status. The violin entry, for instance, is toe-curlingly clichéd: a Romantic swish that doesn’t sit comfortably on the otherwise intense lower strings. However, the second movement is daringly quick in places, despite a slow start, and Otterloo doesn’t manipulate the dynamics like Barenboim or Chailly. It’s less disciplined, but also less assertive, which is refreshing. I much prefer Barenboim’s, which is tighter, more energetic, and full of scholarly focus. However, this is more fun, and with the bassy mix gets a new face.

In all, a fun way to receive Beethoven, and a good addition to one’s Beethoven Nine recordings. It is no Barenboim, but what is? And, congratulations to the editors of this addition for rescuing it from the depths of forgotten recordings. It deserves to be heard again.