BRUCKNER  Symphony No. 7 in E major

"One of the outstanding performances ... everyone should hear this"
- CD Review, BBC Radio Three 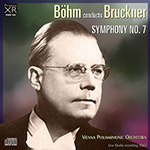 Andrew McGregor - There are other ways of doing Bruckner 7 aren’t there, which don’t have that absolute sense of calm and stillness for so much of the music.

John Deathridge - Yes, the calm is in there of course, but this is a very varied work indeed and there are other ways of doing the symphony. A direct contrast to this is the 1943 Böhm recording, which is highly dramatic. Incidentally, this is done before the appearance of the Robert Haas edition, so he didn’t know anything about all of that. This is part of the second part of the middle section of the first movement, and you can hear just how dramatically Böhm is attacking this music – quite different…

AM - Karl Böhm and the Vienna Philharmonic from 1943. OK, vintage recorded sound, but the electricity of that just slices through, doesn’t it? It’s young Böhm as well…

JD - Yes, it’s not all heavenly bliss in this symphony. It bristles with expression, in structure as well, and the young Böhm is fearless in bringing all this out. His later recordings tend to be a bit more prosaic, unfortunately, and I much prefer this over the later ones with the Vienna Philharmonic, for example. His later recordings are better engineered, obviously, and one drawback with this early recording is that the recording quality is a little dubious in places.

AM - It makes is hard to recommend, doesn’t it, against some others…

JD - Yes, the frequency variations – in fact the orchestra seems to change in pitch in some places – so it’s a pity about that, because I think this is actually one of the outstanding performances of this.

AM - Everyone should hear this. I came to it new last week, and I found it really exciting...

The seemingly endless parade of Bruckner releases combines the continuing interest of collectors in the performances of Karl Böhm (see 38:5 for interesting reviews of Mozart and Brahms). In this instance, Pristine Audio’s Andrew Rose has come up with something of a curate’s egg, a restored performance which may be of interest although (in my view) not necessarily for the best of reasons. I first knew this recording six decades ago, 1955, heard on Vox LPs (PL 7190) in the listening booth of my local emporium. The dreadful sonics could not compare with the van Beinum recording on the London (Decca) label (see my comment in 38:4) and the sample album was returned to the shelf. A few years later, Vox issued a five-LP set which included this Seventh, the Klemperer/VSO Fourth, a Horenstein Ninth, and what purported to be a March 1949 performance of the Eighth Symphony led by Furtwängler with the Berlin PO. Again, the supposed Böhm performance, like that by Furtwängler, was in sonics so poor as to warrant no more than a single listening.

I had forgotten about this performance, from June 1943, not a happy period in VPO, Austrian, or for that mater world history. From another conductor, we might in mid-war Vienna have gotten a performance of catharsis. From Böhm we hear Bruckner at times (in the second movement) close to stasis. I generally enjoy Böhm in Wagner and Richard Strauss, in some Mozart and Verdi, more in the opera house than in the concert hall. I saw him conduct Salome at the old Met with Nilsson—one of the unforgettable musical experiences of my life. I do not share the view of Frau Elisabeth Furtwängler and others (see 38:5, p. 312) that he was merely a “Kapellmeister.” Like many (most?) performers, his inspiration level varied. As a Brucknerian, however, I do not question his inspiration, just his basic feeling for the music. I don’t think he was capable of leaning into the ebb and flow of Bruckner as I personally wish to hear his music performed. It is too straight, with too many bar lines. This suits the Seventh Symphony better than the Fourth, which Böhm recorded on 78-rpm discs prior to World War II in Dresden, and later in stereo for DG with the VPO—a recording praised to the skies, particularly in the UK, but not by me. He also did a Fifth Symphony pre-war in Dresden and I regret never having heard that.

This is, do not mistake me, a remarkable performance. And Pristine Audio’s remarkable resuscitation of early German (Austrian) tape technology—Rose assumes this to be a tape rather than a wire recording, if I read his helpful notes correctly—enables us to hear it in reasonable sonics for the first time. A previous Preiser issue was an improvement on Vox’s wretched LPs but hardly capable of letting us hear the wartime VPO in full cry. I wanted to hear the orchestra, stripped of its Jewish members, sounding inferior, but such was not the case, any more than with Furtwängler’s surviving performances. This is exciting, accurate playing, with solid bass and impactful brass. The notes give us some indications of the problems which were overcome in the restoration; they were massive. This disc is one of Pristine’s most amazing technical accomplishments and self-recommending on that score alone. No matter what my reservations about the performance, we are hearing history here. (Andrew Rose speculates the broadcast was spread over two days, hence the dates shown in the headnote, above.)

In truth, my reservations are fewer the more I listen. It is, for me, a performance deficient in lyric feeling. The first movement is successful, and has considerable dramatic thrust. Timing is spot-on normal for the course (not that I normally worry about such). I have come to regard the last two movements more highly than I initially did, having come to the conclusion that I allowed myself to be disaffected by my distaste for Böhm’s performance of the Adagio. The scherzo moves along well, and the finale, although a bit peremptory (perhaps “terse” is a better term), works in the conductor’s fashion.

But for me, the Adagio fails. It is not simply a matter of being “too slow,” although at 27:35 that charge can well be made. Rather, to state the case differently: As I have repeatedly listened to it, I consistently feel it is just taking too long to get from one point to another. The music stands still at times; it does not flow. Concentration is lost. Jochum takes not quite two minutes less in his leisurely traversal (in his Dresden/EMI recording). At 24:38, Carl A. Bünte is only one additional minute faster than Jochum in his performance which I discussed in 38:4. In that issue, James A. Altena reviewed a performance of the Seventh led by Paul Hindemith and he noted that 22 to 24 minutes seem typical for this movement but that a large number of conductors are faster than that. Looking at the discs on my own shelves, I find most recordings I have take just about the same amount of time for each of the first two movements. That doesn’t make it “right,” it’s just what I am most used to. Furtwängler/BPO in Cairo (1951) took just under 22 minutes. Both Bünte and Jochum are fine, although slower. I suspect what I dislike in Böhm’s Adagio is not so much the tempo as the lack of forward momentum (a feature Altena praised in the Hindemith performance).

Having indulged myself regarding the performance, I must summarize by saying that what we have here is a remarkable sonic snapshot of history, which we can now appreciate in proper focus. This is a performance from close to three-quarters of a century ago which can be heard accurately for the first time. That should be reason for our gratitude to Pristine Audio, and more than reason enough to purchase this disc.