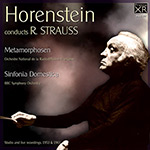 Pristine Audio continues to add to the Horenstein discography with this very important release.

Pristine Audio continues to add to the Horenstein discography with this very important release. Metamorphosen was recorded for LP by EMI in 1953, and issued on the Pathé and Angel labels at the time, but has never been reissued in any form, so this is its CD debut. The Symphonia domestica is a BBC broadcast that has never been available, and even more importantly it is the only performance of this work by Horenstein to be issued.

There is a live Metamorphosen from 1964 with the same orchestra, issued by Music & Arts as part of a nine-disc set that I reviewed in Fanfare 28:3, but frankly this studio recording is the more successful reading. Horenstein and the engineers managed a perfect balance between the 23 solo string parts, and Pristine’s XR (ambient stereo) transfer brings out a depth and richness to the sound that was lacking in the original. Horenstein captures perfectly the bittersweet nostalgia and sense of regret, even desolation, that is inherent in this music. With his sparse textures and sensitive phrasing, Horenstein’s performance makes a strong impact.

The Domestic Symphony is not one of Strauss’s most tautly constructed symphonic poems, and it can easily sound disjointed and wander aimlessly. But when well performed it can be one of the composer’s most effective and powerful scores. The source for this release is an off-the-air taping of a BBC broadcast, which suffers from a bit of dropout at the outset but gets better as it goes along, and in the end it makes for acceptable listening for any collector used to the limitations of “historic” recordings. What makes it worth getting used to is that usual combination of Horenstein strengths: rhythmic tautness, careful attention to balance and color, and tempo relationships that seem unerringly right. This latter is not only a matter of actual tempo choices, but also a matter of smooth and perfectly judged transitions. Horenstein projects true and touching sentiment in the love music without turning mawkish,

There is plenty of competition for the Domestica, from historically important recordings by Strauss himself and Furtwängler to fine modern versions by Mehta, Karajan, Reiner, Szell, and Maazel. I will not try to make the case that Horenstein’s is superior to all of them, but I will maintain that anyone interested in the work should hear this recording. Horenstein finds the perfect balance between maintaining structural integrity and giving the appearance of spontaneity, and the BBC Symphony plays as if possessed throughout. At 44:33, this is one of the slower performances in the catalog, but it never feels slow because of the strong rhythmic pulse that underlies even the lyrical sections. Horenstein maintains tension over long spans of generous phrases, and ties everything into a unified whole because he never loses sight of the overall shape. Much gratitude is due Pristine Audio for this immensely gratifying release.