"As soon as Brahms heard the sound of the violin, he pricked up his ears, during the Andante he wiped his eyes..." Max Kalbeck, 1896

It was Mark Obert-Thorn who introduced me to the violinist Bronislaw Huberman with his transfers for Pristine of the complete Mozart and Bach recordings (PASC397) that we issued in 2013. So when I was browsing through a large collection of LPs donated to Pristine and discovered a couple of discs dedicated to Huberman I resolved to see what I might be able to do with them.

Not for the first time I've found that working from EMI's excellent analogue LP transfers has produced excellent results I would struggle to match from their shellac discs, and here the Beethoven has come up magnificently - bar the occasional intrusion of slight peak distortion at the very top end you might easily think this a recording from the 1950s rather than the first half of the 1930s. Huberman's playing and tone truly shines, and the Vienna Philharmonic's playing is fully rounded and truly magnificent. This is one of the great recordings of the Beethoven Concerto, and in this XR remastered version has surely never sounded this fabulous before.

The Brahms hails from a live recording made in 1944, some 48 years after Huberman's playing of the work had won praise and tears from its composer. Once again I've been able to make major and significant improvements to the sound quality - again battling against high end peak distortion whilst trying to preserve and highlight as much of Huberman's tone as possible. This is a masterful performance indeed - and here once again it is available in unprecedented sound quality that does full justice to the playing. 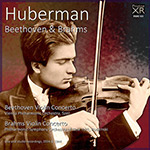 1896 - playing for Brahms: Max Kalbeck tells of Brahms’s response to the young Huberman's performance of the Violin Concerto: ‘As soon as Brahms heard the sound of the violin, he pricked up his ears, during the Andante he wiped his eyes, and after the finale he went into the green room, embraced the young fellow, and stroked his cheeks.’

As a 14-year-old he played Brahms’s Violin Concerto to the composer, who was stunned and allegedly wanted to write a rhapsody especially for him. For his Viennese concerts at around the same time (1896), the audience included the likes of Dvorák, Mahler, Bruckner and Johann Strauss. Two years earlier the legendary diva Adelina Patti had invited him to take part in her farewell gala in London, which he did, to great acclaim. When Europe was in turmoil in the 1930s and with Hitler’s Germany out of bounds he would regularly, and passionately, promote the ideal of a ‘Pan-Europa’ movement. Even Furtwängler’s heartfelt pleas for him to return fell on deaf ears. With Europe’s Jews being thrown into exile, or worse, he founded what was eventually to become the Israel Philharmonic, Arturo Toscanini conducting the first concerts (without fee). Polish-born Bronisław Huberman (1882-1947) constituted a model combination of nobility, impulse and intellect. He was a musical maverick who brooked no compromise and whose few recordings prove the point with a vengeance...

In 1937, just before the Anschluss, Huberman left Vienna and took refuge in Switzerland. A year later his career nearly ended when the aircraft he was travelling in crashed in Sumatra: his wrist and two fingers of his left hand were broken. Miraculously, after intensive and painful retraining he was able to resume performing. His surviving off-air recordings date from this later period, including the Tchaikovsky Concerto under Eugene Ormandy – identical in all but small details to the 1929 version under William Steinberg – and, most valuably, the Brahms Concerto with Artur Rodzinski on the rostrum (Music & Arts, A/03). To hear Huberman quietly glide back into the main body of the first movement after the cadenza is to understand why Brahms reacted the way he did. How sad that he died before writing that rhapsody. And what a scoop it would have been, a Brahms rhapsody played and recorded by its dedicatee....

This is essential listening for anyone interested in performance style history, the violin, or these great concertos

These classic performances have been reviewed before in Fanfare, with those reviews ranging from positive to enthusiastic. The Beethoven is a 1934 British Columbia studio recording, and the Brahms is a New York Philharmonic live broadcast from January 23, 1944. One particularly unusual feature of the Brahms is a cadenza I have never encountered before, credited to one Hugo Heerman.

That, however, is not the most unusual aspect of these performances. It is the playing itself that is unusual. Huberman was never a universally accepted violinist, but to those of us who loved his playing the flaws were insignificant. What were those flaws? A tone that can at times turn thin or coarse, occasional roughness in fingerwork, and occasional intonation trouble. Interestingly, though, when one listens to his mid-1920s acoustical recordings such as the Carmen Fantasy one marvels at the technical ability and accuracy at blazing speeds.

But what Huberman had was an extraordinary musical imagination, and he applied it to every phrase. There is a well-known story of his performance of the Brahms when the violinist was 14, that reduced Brahms to tears. The legend is that afterwards, when Brahms wrote a touching inscription in Huberman’s music, the young violinist complained that the audience applauded after the cadenza, to which Brahms replied, “Then you should not have played it so beautifully.” (One presumes Huberman performed the Joachim cadenza in 1895).

This is clearly violin playing from another age, an age when performers were willing to risk a level of individuality that would be frowned upon today. It would take any listener with even middling experience and knowledge only a few minutes to distinguish between performances by Heifetz, Kreisler, Szigeti, Huberman, and Milstein. That would be far less likely in today’s music world. Huberman’s performances are deeply personal, with turns of phrase and touches of dynamic shadings that no one else might think of. He uses a liberal amount of portamento (sliding from one note to the next), a performance tool that was more common in his time than it is in ours, and he uses less vibrato than did his colleagues. His phrasing is highly individualistic, and the playing is so alive and in-the-moment that it is impossible for you not to be fully engaged by the performances. Not one phrase is tossed off without a clear sense of where it fits in the overall scheme of the piece.

It must also be noted that both performances gain from remarkable conducting. Szell and Rodzinski were not conductors who saw their roles as simple accompanists, but rather as full-fledged musical partners, attentive to both detail and overall sweep. If I were ordered to use a single word as a descriptor of these performances, that word would be “urgency.” They have about them an urgency that communicates a sense that “we must play these pieces right now, and in this way, because we believe so passionately in what the music has to say and we simply must say it.”

This new Pristine remastering surpasses all prior versions of both recordings, in fullness of orchestral sound particularly. The EMI LP transfers of the Beethoven have always sounded remarkably good for a 1934 recording, and there is a good Naxos edition as well, but Andrew Rose has somehow managed to find a new level of richness of color for both Huberman and the Vienna Philharmonic. The Brahms has undergone an even more major improvement over its Music & Arts incarnation. The original source is probably an off-the-air recording, rather than a master, and a number of labels have issued it, but never with as little distortion and as wide a frequency range as it has here. The XR ambient stereo version simply gives the recording a sense of space that the pure mono version lacks. This is essential listening for anyone interested in performance style history, the violin, or these great concertos. (That should cover just about everyone)!